“Families who have been forced to watch loved ones suffer in hospital hallways while waiting for treatment, or who have to scrape their savings together to pay for take-home cancer medication — they know that every cut to health care makes their lives a little bit harder,” said Horwath.

“The Minister of Health has already begun to warn hospitals that they will have to prepare for even more cuts.”

Doug Ford has already cut $10 million from flu surge funding, and $330 million per year from mental health supports and services. A new ‘realignment’ of health care programs threatens to bring even more cuts and layoffs, with many concerned that it will mirror the last Conservative government’s cuts, which saw 28 hospitals closed, and more than 6,000 nurses laid off across the province.

“Families want to know that when a loved one needs to visit the hospital, they won’t be stuck in a hallway. They need to know that a long-term-care bed will be there for an aging parent. And they deserve to feel confident that they’ll be able to get the drugs they need when they’re sick, without having to rack up credit card bills.

“Instead, Doug Ford is promising over $6 billion in cuts, and hinting that he’s going to privatize parts of health care,” said Horwath.

“New Democrats believe the people of Ontario should own their health care system, not private interests.” 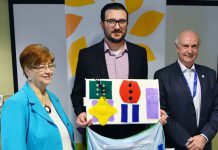