THUNDER BAY – Forest Fire officials are carefully watching lightning activity as unsettled weather moves into the Northwest Region from the south, May 24.

A forecast of widespread rain through much of the region has yet to materialize, instead offering pockets of localized rainfall which may fail to have a lasting effect on a high hazard for forest fires in dry spring conditions.  At the time of this update, a high hazard presides over most of the region with pockets of low and moderate hazard in the Fort Frances and Thunder Bay Fire Districts. Hazard conditions in the northern reaches of the Red Lake and Sioux Lookout Districts are extreme.

There was one new fire in the Northwest Region by the afternoon of May 24. Nipigon Fire 5 is 25 hectares in size and is currently not under control.

The Northwest Region’s fire of note is Red 30 which crossed the Manitoba/Ontario provincial boundary, May 22 and is 1,600 hectares in size on the Ontario side. The fire is located approximately 60 kilometres west of the First Nation community of Poplar Hill. Officials with the OMNR Fire Program are currently assessing ignition opportunities and limited suppression with fire crews in an effort to contain the fire within natural boundaries. 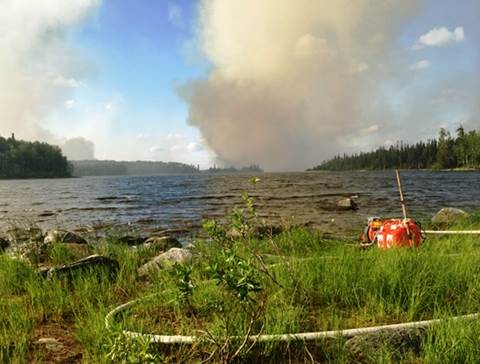