Moose on the Loose – Canadian Premiere

THUNDER BAY – ENTERTAINMENT – For anyone needing a boost, some serious laughs and smiles, your Friday night or special evening is awaiting you at Magnus Theatre. Thunder Bay’s own Dina Morrone through MOOSE ON THE LOOSE is going to make your night.

Dina Morrone is a Thunder Bay born and raised playwright who now lives in Los Angeles California. Her energy, enthusiasm and obvious love for our city is contagious.

MOOSE ON THE LOOSE, is a family friendly, uproariously funny comedy written by Thunder Bay’s own Dina Morrone is about to burst onto the Magnus Theatre stage!

The Story – Roots in Thunder Bay

A loose moose has wandered into town and four generations of an Italian/Canadian immigrant family soon realize the moose is not the only one that is displaced.

MOOSE ON THE LOOSE is a semi-autobiographical play about a family from Italy who have set up home in Way Up Bay, Ontario. The loose moose acts as our narrator and guide as we meet the Tappino family; a chaotic but loving family trying to come to terms with a wayward moose, issues of joblessness, a daughter with a secret, and a couch potato son who won’t budge.

“I am ecstatic and overcome with emotion that MOOSE ON THE LOOSE has been selected by Magnus Theatre to be a part of the 2014-2015 season. Magnus Theatre is a gem of a theatre with a great reputation for doing top-notch quality work,” said Dina Morrone, playwright.

With twelve actors playing fourteen roles, MOOSE ON THE LOOSE is an eclectic mix of actors both new and returning to Magnus Theatre. Returning actors include Scott Maudsley (last seen in Same Time, Next Year) who plays the Moose and Police Chief, Viviana Zarrillo (last seen in Hana’s Suitcase) is Mama Maria Tappino, Danielle Nicole (last seen in this season’s Ethan Claymore) takes on the role of Carmela, Sam Moses (last seen in Over the River and Through the Woods) is Nonno Rodolfo Pupi and Linda Goranson (who just performed in Doubt, A Parable) plays Nonna Pina Pupi.

MOOSE ON THE LOOSE is a warm, heart-felt portrayal of the immigrant story that will make you laugh and cry in almost the same breath. Spend the evening with the Tappino family and the moose on the loose in Way Up Bay at Magnus Theatre. 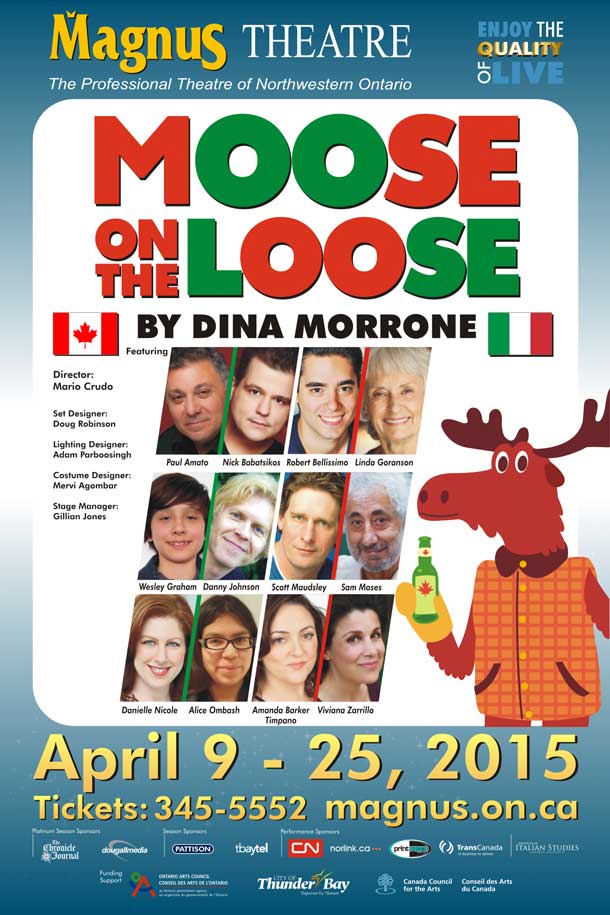 Moose on the Loose – The Inside Story with Mario and Dina