THUNDER BAY – The Walk a Mile Film, produced by Thunderstone Pictures, was presented to a large audience at the Finlandia Club in Thunder Bay.

Michelle Derosier, the filmmaker shared background on the creation of the film.

Targets and Heroes was a an added film, “The reason that I did that, was first of all my grandmother was murdered a long time ago, about forty years ago. Five years ago was the first time I started to seek answers, and no one had any answers.”

“That day five years ago, was the first time I cried, even though I had never met her”, shared Michelle.

“Then two years ago, in 2012, I found myself a victim of violence, that make me very conscious of the issue of murdered and missing women.”

“I think I am a pretty together gal, but when I found myself a victim, my world changed. But I am here”.

“I can’t help but try to do something, so Targets and Heroes is my way of doing something to help”.

“We really need to share these issues, and we need to start taking some action.”

“I really encourage you to go to the gallery and see ‘Walking with our Sisters’.

“I really want to acknowledge Sharon Johnson, to me she is a hero”, stated Michelle.

Sharon Johnson is the person who is behind the Full Moon Memory Walk held in Thunder Bay.

The short films are offered as teaching tools for people across the city and region.

Over the past several years, Anishinabek women across Canada.

Sharon Johnson, a community hero on Thunder Bay, has continued to bring awareness to the cases of missing and murdered women.

While some feel that the issue by focusing on Indigneous women is to not realize the murders of all women, the reality is that an Aboriginal woman is seven to eight times more likely to suffer from violence than any other group of women.

John Hannam stated, “One of the goals of the film project was to raise community conversation”.

Asking the audience, Hannam asked, “Why do you think that Aboriginal Women are targets of violence more than other women?”

Joyce Hunter shared, “The dehumanization of Aboriginal women, has been a factor, we are all conditioned to think, and feel and believe in a certain way”.

“People may have a tendency to judge a person based on colour. We are all equal, is something white parents tell their children and that is just not true”.

We are conditioned socially to make judgements.

An audience member said, “We have all grown up watching cartoons, and often the Aboriginal person is degraded in those images”.

“In the popular culture, often the women are seen a disposable”.

“When the word prostitute comes up, especially in the media it is often code words, and it is used to devalue the life of the person for whom it is applied to”.

“Everyday we are pounded with negative ideas about who we were, we need to listen to the teachings, they are the very core of human beings and what human beings should strive for”.

Erin Marie Bottle, stated, “I am going to be blunt about this, the Crown refuses to recognize our women. Women are the speakers, and the owners of the minerals”.

“Being in that place of not knowing, and learning from there, we get caught up in those terms like colonialism, but I think it comes down to individualism”.

The screening of the Walk a Mile project was held in conjunction with the Walking With Our Sisters project. 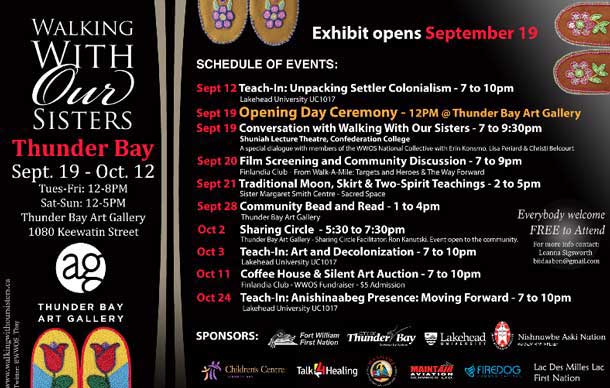 Justice Murray Sinclair at Opening of Walk a Mile