MONTREAL – AVIATION – Bombardier Aerospace has delivered the first of 30 enhanced CRJ900 NextGenaircraft to American Airlines Group Inc. The aircraft will be operated by American Airlines Group wholly owned subsidiary PSA Airlines, Inc. under the American Eagle brand. The purchase agreement for the aircraft, which was announced in December 2013, also included options on an additional 40 CRJ900 NextGen aircraft.

American Airlines is the first customer to take delivery of the enhanced CRJ900 NextGen regional jet, which provides up to 5.5 per cent fuel burn reduction over earlier-generation CRJ900 aircraft.

“This milestone delivery of the first enhanced CRJ900 NextGen aircraft further cements our long-standing relationship with American Airlines and we are pleased to welcome PSA Airlines as the latest operator to join the CRJ900 NextGen family,” said Ray Jones, Senior Vice President, Sales, Marketing and Asset Management, Bombardier Commercial Aircraft. “Both airlines have been operating Bombardier aircraft for more than 10 years and have helped the CRJ family of aircraft become the benchmark in regional aviation. We look forward to the aircraft’s imminent entry-into-service and congratulate American Airlines and PSA Airlines as they target their various markets with the right aircraft to meet the requirements of both business and leisure travellers.”

Like other members of the CRJ Series family of aircraft, the light weight and advanced aerodynamics of the CRJ900 NextGen regional jet combine to deliver improved efficiency and reduced operating costs compared to other aircraft in its class. Since the launch of the earlier-generation CRJ900 aircraft, enhancements to the CRJ900 NextGen aircraft have resulted in up to 5.5 per cent fuel burn reduction. 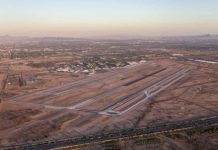