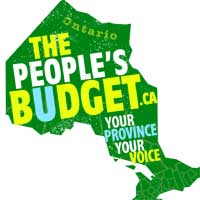 DRYDEN – “The New Democrats are putting their own narrow self-interest first,” stated Vic Fedeli, the PC MPP from . PC candidate Randy Nickle expressed concern that the people of Kenora – Rainy River are likely going to be hurt by the decision of local NDP MPP Sarah Campbell to support the Liberal budget.

“NDP leader Andrea Horwath calls them liars and corrupt in the morning, and supports their budget in the afternoon,” charged Fedeli . “I don’t understand that motivation. After the revelations of wasted money and deleted e-mails trying to cover up the political motivation for cancelling the gas plants in Mississauga and Oakville – if they’re corrupt, as we all agree they are then we have to look after the interests of the people of Ontario and vote them out of office.”

“We deserve an MP who will work for this riding, with business and government to help create jobs here in the North West, and not tow the party line for Toronto.  It is time for change. My vote in the legislature will always be with Kenora Rainy River. It is time to get the right people at the table to ensure that our needs in this riding are met first,” stated Nickle.   Ontario Progressive Conservative MPP Vic Fedeli stated today that the NDP deal that propped up Liberals on the budget vote will prevent the minority Liberal government from facing the voters.

Candidate Randy Nickel states, “I am worried about the ‘surprise’ cuts and fees that will likely be hidden in this budget. Last year, the NDP-Liberal budget recklessly cut in the North. We had the rug pulled out from under us, Tourism Centers closed, services cut backs and closed Provincial Parks. The Ontario PC Party have a real and meaningful plan to get this region back to work.  We could once again fuel the Provincial economic growth. It is hard to let another year pass by, watching the potential of the North be squandered, when we should be achieving meaningful progress.”

Randy Nickle is a long standing resident of Kenora, where he owns and operates a number of businesses and is an active community member.  Randy grew up in Dryden where he learned the value of getting involved in his community.