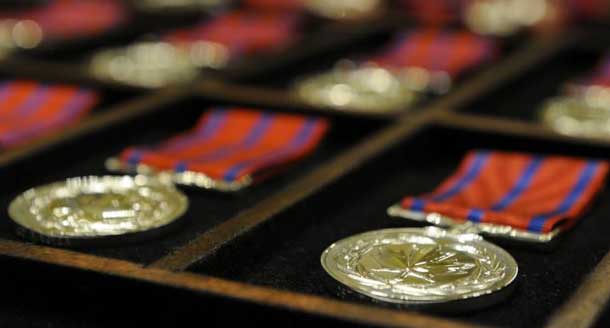 OTTAWA – Right Honourable David Johnston, Governor General of Canada, presented 1 Star of Courage and 46 Medals of Bravery at a ceremony at Rideau Hall on Friday, June 7th. There were several local residents honoured for their bravery.

On January 26, 2008, Bernard Keetash, Mark Monture and Jeffrey Neekan rescued a 13-year-old boy from a burning house, in Mishkeegogamang, Ontario. When a fire broke out in their home, the occupants were able to evacuate all but one of their children to safety. In despair, the parents cried out to their neighbours that the boy was still inside.

Messrs. Keetash, Monture and Neekan wrapped wet blankets around themselves and made their way upstairs, despite the intense heat. After locating the boy, Mr. Keetash picked him up and carried him out of the blaze. Although the victim suffered from burns and smoke inhalation, he survived, thanks to his three brave rescuers.

For their bravery, the trio were awarded the Decorations for Bravery.

On October 30, 2011, Timothy Tait rescued a man from a burning house, in Mobert, Ontario. Mr. Tait noticed smoke coming from his neighbour’s home and ran to help. He kicked open the front door and crawled through heavy smoke to find his neighbour on the living room floor. Mr. Tait grabbed the man and dragged him outside. Learning that the victim’s children might still be inside, Mr. Tait went back in, but was unable to search all the rooms because of the intensity of the smoke and flames. Thankfully, the children were spending the night at a relative’s home. The victim fully recovered from his burns.

On August 1, 2011, Eunice Selagi from Kaministiquia, and Chief Warrant Officer Tom Walker rescued a disabled man from a burning vehicle, near Ignace, Ontario. Mrs. Selagi had been driving the man in her van when she noticed the vehicle was overheating and pulled over to check on it.

Driving behind them, Chief Warrant Officer Walker stopped to help. As flames and intense heat rose from beneath the van, he pulled open the side door, where he saw the quadriplegic victim strapped into a wheelchair. Mrs. Selagi jumped inside and unlatched the straps that secured the chair in place. Both rescuers got the chair onto the lift and lowered the ramp which, unfortunately, did not reach the ground. With the help of bystanders, Chief Warrant Officer Walker was able to lift the victim from his wheelchair and carry him a safe distance away.