Home NNL Headline News Are Canadians Uncertain About Where We Are Headed?

Canadians are divided on the performance of the Harper government but negative assessments have risen over the past 12 months. The number of those who rated the Conservative Government’s performance as “very” or “somewhat” poor jumped eight points, to 33 percent. Performance ratings were stronger for the Conservatives in the Prairies and among male voters and weaker among women and east of the Ottawa River.

“The data shows that the percentage of Canadians who say the country is on the right track has fallen to 48 percent, down markedly from 64 percent who were confident with the direction a year ago,” continues Nanos. “Although 48 percent right track numbers should still be considered good, it is the lowest level recorded in the survey since Stephen Harper became prime minister in 2006”.

“The last election resulted in the Ottawa River being the new political dividing line,” adds Nanos. “On many of the issues, this political asymmetry has mirrored the asymmetry in the Canadian economy between the resource propelled economy in the West and the manufacturing economy in central Canada.

Nanos Research has conducted the tracking survey in partnership with the Institute for Research on Public Policy for the past six years. Between November 28th and 29th, 2012, Nanos Research conducted a random representative online survey of 1,000 Canadians 18 years and older. 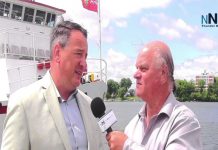 No Justice There! The Firing of Minister Jody Wilson-Raybould