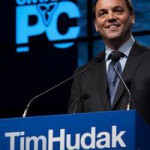 QUEEN’S PARK – “The men of the infantry and tank regiments chosen for the invasion simply had to disregard what lay ahead for them across the channel. We just dug in, trained harder, determined to do what some were saying would be impossible.” – Cliff Chadderton, Canadian World War II veteran and Chief Executive Officer of The War Amps.

The following is a statement by Ontario PC Leader Tim Hudak on the 68th Anniversary of D-Day:

Early in the morning on June 6, 1944, Canadian soldiers and other Allied Forces seized their chance: they stormed the beaches of Normandy, France, and began the liberation of Europe.

Through bloodied waters and a hailstorm of bullets, thousands of Canadian soldiers held their ground on Juno Beach. Of all the Allies, our soldiers made it the farthest inland on D-Day, driving back the Nazi forces.

The capture of Juno Beach was one of the greatest military victories in Canadian history, forever linking the soldiers under our flag with the rescue of liberty in Europe from the jaws of tyranny.

Today, the hearts of all Ontarians and Canadians will swell with pride as we commemorate the soldiers who fought for freedom 68 years ago. May we never forget the sacrifices they made.