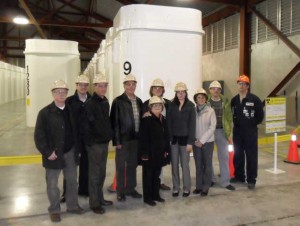 NIPIGON – Township of Nipigon representatives visited Toronto recently to meet with the Nuclear Waste Management Organization (NWMO) to learn about Canada’s plan for the long-term management of used nuclear fuel. The ‘learn more’ opportunity, funded by the NWMO, included a detailed briefing by NWMO staff, and a tour of the Pickering Waste Management Facility, where used nuclear fuel is currently stored on an interim basis. “Regardless of where this Depository is eventually located it will have an impact on all communities” commented Mayor Richard Harvey. “As Community Leaders we feel it is important to be engaged in the process to protect the interests and concerns of our community.”

The NWMO said that it anticipates that it will take between seven and ten years to decide on where to locate the deep geological repository and associated facilities. “This is a very long learning process that is just beginning,” continued Harvey; “Ultimately, there will have to be a compelling demonstration of willingness expressed by the citizens of any interested community, after a long period of site assessment, before it is selected to host the project.”

In June 2007, the Government of Canada selected Adaptive Phased Management as Canada’s plan for safeguarding the public and environment over the very long time in which used nuclear fuel must be managed. The plan requires that Canada’s used nuclear fuel be safely and securely contained and isolated from people and the environment in a deep geological repository in a suitable rock formation. In May 2010, the NWMO published a process for identifying an informed and willing community to host the project.

“Nipigon Council has not made any decision about the project whatsoever”, said Councillor Louise Dupuis. “As we learn about the deep geological project and the site selection process, it is important that the community, including neighbouring First Nations, learn along with us.” The Township is considering asking the NWMO to create an information kiosk for the Township where people can drop by and pick up material at their leisure. Backgrounders on various topics will be available and a touch screen television will be installed where people can watch animated videos of the project and on used nuclear fuel transportation.

For more information about the NWMO, and the site selection process, please visit: www.nwmo.ca/sitingprocess