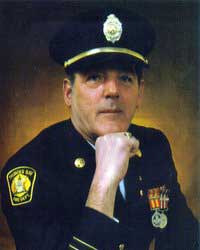 Here is what Jason shared:

Good Morning everyone. Thank you ALL for coming.

Your support and well wishes have meant the world to our family. For those of you who do not know me, I am Papa’s eldest Grandchild, Jason. I wanted to speak today about how much My Grandfather meant to our entire family and to me.

I really can not put into words what he has meant but I will try and share just a few memories. My Grandfather was a strong and stubborn man, a hard worker, a dedicated fire fighter, a caring family man, and the best grandpa a boy could ask for. From when I was just a young boy, I can always remember my summer’s at Rossport with Papa, going fishing at either Bear trap or out on the big lake to try and catch a trout or if we were lucky, Salmon or Rainbow.

He taught me how to fish, what song to sing while waiting patiently for fish to bite, and later in life, how to drive the boat and what spots to avoid on the lake. Fishing was always Papa’s Zen, his peace, where he could go and enjoy a few hours of quiet away from the busy world. Although I didn’t realize it at the time, Papa was teaching me so much more than just how to fish and how to drive a boat; he was teaching me about life.

He taught me how to wait patiently even when the outcome you are waiting for is uncertain and may not go in your favour. He taught me that silence isn’t always a bad thing and, most importantly, through our many escapes to Rossport, he taught me that in life, if you want something, you have to go out and get it. The fish won’t just come to you; you have to go to them.

And with good planning and the right lure, you might just catch that fish that you want.

As everyone here knows, My Grandfather was a fiery guy. This was most obvious by watching the way he and his brothers would argue at Rossport over the smallest of things, just like brothers should, and the way he pounded that dinner table whenever he would get worked up.

Grandpa ALWAYS made his point and I can remember him telling me that ‘this is where our families’ strong determination comes from. Papa was always the band leader of the Bruley Family band, either playing the wash bucket or building us a bottle cap stick to bang on the ground. You also can’t forget his playing of the spoons or playing Stompin Tom or Engelbert Humperdinck around the camp.

Then… there were the bonfires. I remember seeing pictures of the late night shenanigans around the camp fire. Papa was the life of the party after a few Palm Breeze and Pepsi’s. The bonfires at Rossport were legendary. Papa always had Dayna, Colin and I at the Rossport fish derby. Every year we would go fishing in hopes of catching the biggest fish to win a prize. The tackle box I won is still in the boat today!

Then there were the boats trip to Bar Island where we would go rock picking or enjoy a picnic lunch of toasted Klick and Onion sandwiches. Papa Specialty! Mmm Appetizing isn’t it! In the early 90’s Colin and I almost burnt our house down; I know what you’re all thinking … yes the grandchildren of a Fire fighter almost burnt down their home. I remember when we got home; the house was full of smoke. Earlier, Colin and I had lit all the candles that mom had stored under the Bar downstairs and closed all the doors and forgot as we hustled off to skating.

Soon after the fire fighters arrived Mom called Grandma and we waited nervously for Papa to arrive. To say the least, I was NOT looking forward to this visit from Papa. I will never forget the way he picked us up off the ground… by our ears… as he lectured us about fire safety.

It was a LIFE lesson Colin or I will never forget. Papa introduced me to the game of curling. One Friday afternoon at Papa’s Fire Fighters curling league he had me go TRY and throw the rocks down the ice to see if I could hit the rings. For the whole time I was on the ice, I think I hit the rings maybe twice. Nonetheless, from that day on, I fell in love with the sport and have my Grandfather to thank for that.

It was something we could share and often do together. I can remember many times Papa would be coming off the ice as I was about to start juniors at the Port Arthur Curling Club. He always stayed around for a bit having a beer with his Loose Ends buddies and would watch me curl. He loved the game as much as I did. As Papa’s health began to turn, the last 4 years have been extremely difficult for him.

From having cancer to not having cancer to having chemo and multiple surgeries and ultimately having his life end from his medical issues, he never gave up his incredible will to live. When Papa was in the ICU in April, we weren’t sure he was going to make it. But he always knew that he would pull through. It just wasn’t his time yet. He was given a little extra time with us, this time we will all cherish forever.

He fought so hard for us through all the pain and all the hospital stays never letting us know just how bad it really was even though we all knew. He was the most incredible fighter I have ever seen and he did it for his Family.

This past July I had the opportunity to spent 2 weeks with Papa. The quality time with him I will cherish forever. When I landed from Calgary I went straight to the Hospital to see him. Papa was outside having a cigarette and as soon as he saw me, his face lit up with the biggest smile I have ever seen him have. I knew he loved me so much and it definitely showed that day. On another visit he wanted to go to the Casino… so Bev and I went with him, we motored around the casino floor like it was going out of style.

He was enjoying himself and enjoying the freedom from the hospital for a few hours. Having the chance to be able to take him to the casino when he was clearly not feeling well was one of the best days I had and will cherish it forever.

As many of you know our family has not been immune from tragedy, in 1990 we lost Grant, I didn’t really know my uncle very well… as I was just a young boy, but for a father to have to bury their youngest child it was an incredible pain my Papa has carried with him since that horrible day we got the news about Uncle Grant’s passing.
Then 2 short years later, as things were getting back to normal and after returning from Florida, God called Grandma to be with him in Heaven. Papa was incredibly strong for all of us, but the hurt in his heart was so evident to us all. Life was never the same without Grandma and Uncle Grant.

What I will remember the most…. is how Papa brought us ALL together, how he would give us piggy back or Wheelbarrow rides from the wood pile or building rafts in the lake.

I will remember how he would do anything for his family, how I could argue with him about politics or share my recent travel stories with him. I know he was so proud of me and I knew I could talk to him about anything.

He always understanding and never turned his back on anyone.

Life will never be the same without you Papa. You were the best husband, dad, grandpa, uncle and brother you could ask for.

As my Cousin Denise wrote on Facebook shortly after hearing the news of Papa’s passing, She wrote:“A man whose larger then life personality was only matched by the size of his loving heart” And How true that is … Papa, You are my hero and I will never forget all the fun times we had… and all the great talks and disagreements we shared.

Today, you are reunited with Grant and Melinda; I know that Grandma and Uncle Grant will show you the ropes up there. Until we see each other again, may you catch all the fish in heaven’s lakes and golf and curl all year long. I love you so much Papa and I will miss you terribly.