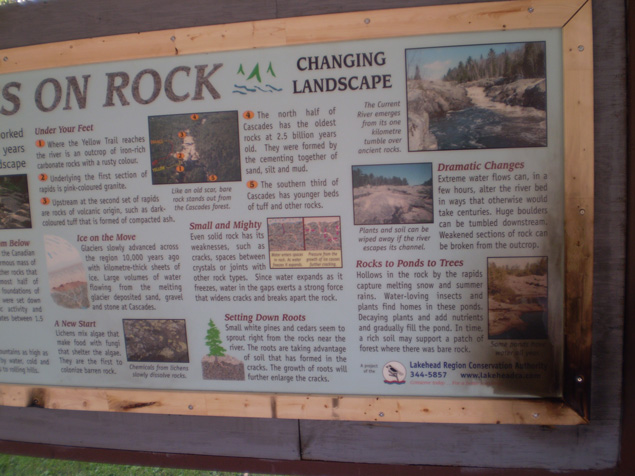 THUNDER BAY – It has happened again.  Officials with the Lakehead Region Conservation Authority are frustrated with the latest act of vandalism to hit the Cascades Conservation Area.

Sometime over the August long weekend someone attempted to set fire to interpretive panels which had just been installed last week. The new panels replace an identical set which were destroyed by arsonists over a year ago.

This time vandals attempted to set fire to one of the panels, causing some fire and smoke damage to a corner of the panel but did not destroy it.

“These panels are intended to help enhance the experience of visitors to the Cascades,” says Authority Chairman, Bill Bartley. “It’s disheartening to have thoughtless individuals attempt to destroy these valuable educational tools.”

Funds for the maintenance and development of Conservation Areas comes from various sources such as visitor fees, annual Explorer Card sales, donations and levies to member Municipalities.

“Since funding is not finite, the Authority may not have the resources to be able to replace the panels if they are destroyed again,” says Bartley.

The Authority is asking anyone who has information about this latest act of vandalism, or any other vandalism at our Conservation Areas to call police or Crimestoppers.