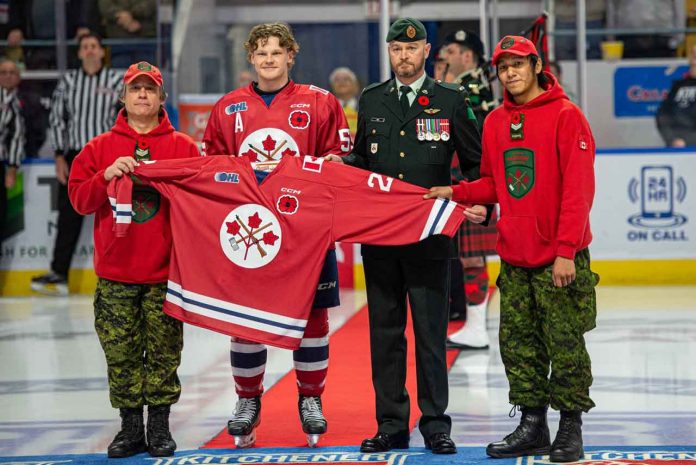 Hosting the Mississauga Steelheads in front of 6,460 spectators, the Kitchener Rangers wore a special Remembrance Day jersey featuring the Rangers’ unique crest and colours. This Nov. 11 marked the 17th year the organization has honoured the Canadian Armed Forces and veterans by issuing a commemorative team jersey and video tribute.

A small group of Rangers from Ontario’s 3Rd Canadian Ranger Patrol Group (3CRPG) based out of CFB Borden were invited to attend the game at the Kitchener Memorial Auditorium and drop the ceremonial puck.

“We try to do research and look for events that are significant. We saw the Rangers were having their 75th this year,” said Kitchener Rangers Vice-President of Operations, Adam Bramhill.

Created in 1947, 2022 is designated The Year of the Ranger, and five Ranger Patrol Groups gathered at several events across Canada this year to mark the milestone.

“It’s an honour to be here. I like hockey for sure,” said Master Corporal Peters, who lives and serves in the First Nation community of Pikangikum. The Rangers received a tour of the arena and a display featuring the special Remembrance Day jerseys used over the years.

A centre ice video highlighted the history of the Rangers, their training and 3CRPG’s numerous life-saving accomplishments prior to the opening face-off. The Steelheads went on to defeat the Rangers 4-1.

“I am very appreciative of what the Kitchener Rangers did. This year is the Year of the Ranger, and I am proud we had the opportunity to show the great work our Rangers do,” said 3CRPG Commanding Officer Lt.-Col. Shane McArthur.

The jerseys were auctioned off with proceeds benefiting the 78th Fraser Highlanders Fort Conestoga Garrison, Support Our Troops, and the Kitchener-Waterloo Poppy Fund through Rangers Reach. Since its inception, the commemorative jersey auction has raised more than $350,000 for charity.

Created in 1947 following the Second World War, the Rangers were established to protect against emerging threats in the north from the Soviet Union.  Today Rangers conduct surveillance, sovereignty patrols, search and rescue, disaster relief, and training of other Armed Forces personnel with survival skills.

The Canadian Rangers are a 5,000-member sub-component of the Canadian Armed Forces’ primary reserve, whose mandate is to provide military presence in Canada’s far north. Members assist with search-and-rescue, other domestic operations, and serve Canadians in sparsely populated northern territory. Many members are Indigenous and First Nations and serve in the communities they live.

Canadian Rangers rescue hunters when their boat engine breaks down