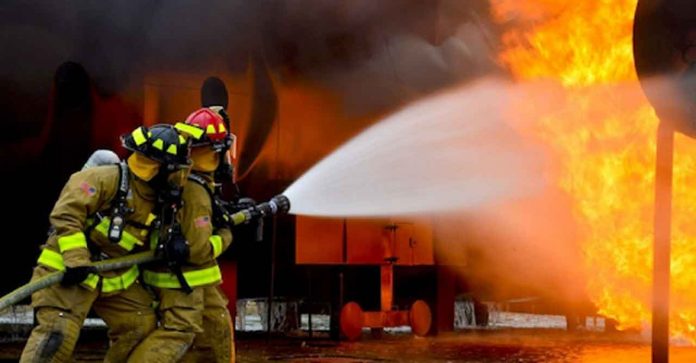 THUNDER BAY – NEWS – Thunder Bay Fire Rescue responded in force to help knock down a fire at an apartment complex on Sherrington Drive.

At approximately 06:00 pm TBFR was called to the 48-unit apartment building on Sherrington Dr. for a structural fire.

The Officer of the first arriving pumper reported black smoke coming from a fourth floor apartment. A second alarm was initiated brining a total of six Pumpers an Aerial Ladder, and a command unit to the scene.

Firefighters made their way to the fourth floor to locate the apartment of origin where they encountered light smoke in the hall.

Upon entry into the involved apartment, the crew encountered heavy thick black smoke.  With the aid of a thermal imaging camera the crew was able to quickly identify the location of the fire, and rapidly bring the fire under control.

The apartment sustained heavy smoke damage but structural damage was kept to a minimum.

The tenant of the apartment was brought to TBRH for observations due to smoke inhalation.

The fire is under investigation at this time.

Residents were evacuated for about two hours while firefighters put out the blaze and worked to remove smoke from the building.

TBFR reminds you that working, and up to date smoke detector saves lives

When Every Second Counts: Importance of a Quick Evacuation Home Fire Plan

Why Do You Need a Fire Watch Guard Now