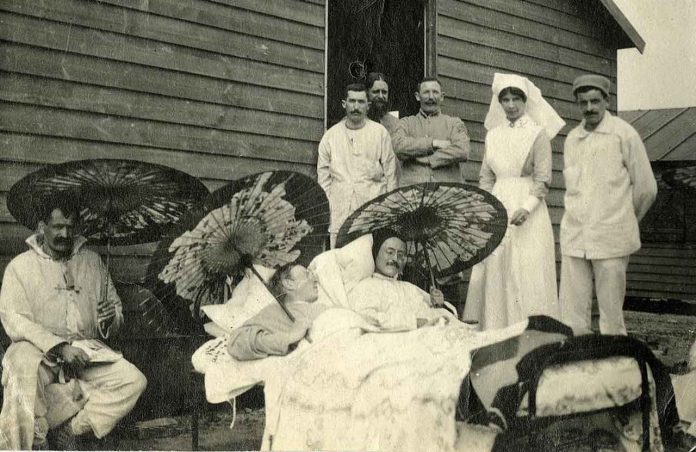 For more than 100 years, women have been an integral part of Canada’s military history. During the First World War, Madeleine Jaffray (1889 – 1972), served as a nurse overseas and returned home missing a limb.

Jaffray was born in Chicago, Illinois and moved with her family to Galt, Ontario, as a child. She trained as a nurse, and soon after the outbreak of the First World War, enlisted with the French Red Cross. Nursing was virtually the only area where women could experience the war at the front.

Jaffray went overseas in December 1915 and spent 10 months working in a military hospital near Bordeaux, France, before being transferred to a mobile ambulance unit in Adinkerke, Belgium. This area was only a few kilometres from the front lines and Jaffray recounted how the unit was bombed. “I was coming out of a covered passage in one of the wards when a bomb fell right in front of me,” she said. This severely wounded her foot which led to an amputation, making her Canada’s only female war amputee from the First World War.

The Nursing Director wrote to Jaffray’s mother, “At one o’clock last night, the hospital was bombarded by German aviators and she [Jaffray] was wounded in the foot by a piece of shrapnel from one of the bombs…It is a bad wound.”

A week after the incident, Jaffray was awarded the Croix de Guerre by the French military for her bravery, with an additional star for her services, though she felt that all the nurses in her unit were equally deserving of it. She was the first Canadian woman to be awarded this medal.

After the war, she worked at the Dominion Orthopedic Hospital on Christie Street in Toronto. She later moved to Edmonton with her husband and continued her nursing career, working for the Victorian Order of Nurses and was a member of the Overseas Nurses Association.

She also became the only female war amputee member of The War Amps, an organization started by amputee veterans returning from the First World War to provide each other with support and adapt to their new reality as amputees.

Annelise Petlock was born a left arm amputee and grew up in The War Amps Child Amputee (CHAMP) Program, which was started by these founding war amputee veterans so that young amputees across Canada could receive financial support for artificial limbs and devices, as well as emotional support.

“Jaffray served in wartime, returned home missing a limb and continued to practice nursing,” says Petlock, who now works with The War Amps. “She never let her amputation stop her from helping others.”

The War Amps has added Jaffray’s story to its website in an ongoing project to tell the stories of its early veteran members. “In doing so, we pay tribute to their service and help to ensure that their sacrifices are never forgotten,” says Petlock.

Spot the danger before you play