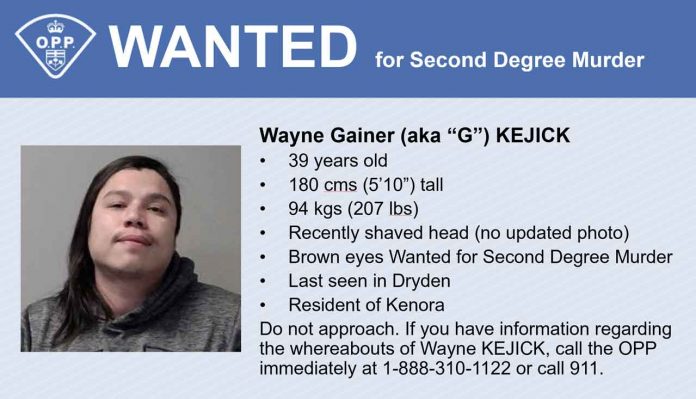 DRYDEN – NEWS – The Dryden Detachment of the Ontario Provincial Police (OPP) has charged one person with murder, and arrest warrant has been issued for another individual, in connection with a death in the City of Dryden.

On the evening of July 13, 2022, the OPP responded to an assault at a home on Whyte Avenue. Officers located David SINCLAIR, age 28 of Kenora, deceased at the scene.

As a result of the investigation, Tyler MITCHELL, age 22 of Winnipeg, Manitoba has been arrested and charged with Second Degree Murder, contrary to section 235(1) of the Criminal Code (CC). He has been remanded in custody, with a scheduled appearance before the Ontario Court of Justice in Dryden on August 8, 2022.

An arrest warrant, also on a charge of Second Degree Murder – CC section 235(1), has been issued for Wayne Gainer (also known as “G”) KEJICK, age 39 of Kenora.

If you see KEJICK, or have information on his whereabouts, do not approach him. Call the OPP at 1-888-310-1122 or your nearest police service. A photo is attached. KEJICK is described as:

·      Brown eyes and has recently shaved his head

While this homicide does not appear to be a random incident, the OPP encourages everyone to be aware of their personal safety at all times.

A post-mortem examination is scheduled for July 17, 2022 at the Ontario Centre of Forensic Sciences in Toronto.

This investigation, by members of the Dryden Detachment, the North West Region Crime Unit and OPP Forensic Identification Services Unit is ongoing, under the direction of the OPP Criminal Investigation Branch and in conjunction with the Office of the Chief Coroner for Ontario and the Ontario Forensic Pathology Service.

Anyone with information regarding this investigation should contact the Dryden OPP at 1-888-310-1122. Should you wish to remain anonymous, you may call Crime Stoppers at 1-800-222-8477 (TIPS) or access their website at ontariocrimestoppers.ca where you may be eligible to receive a cash reward of up to $2,000.