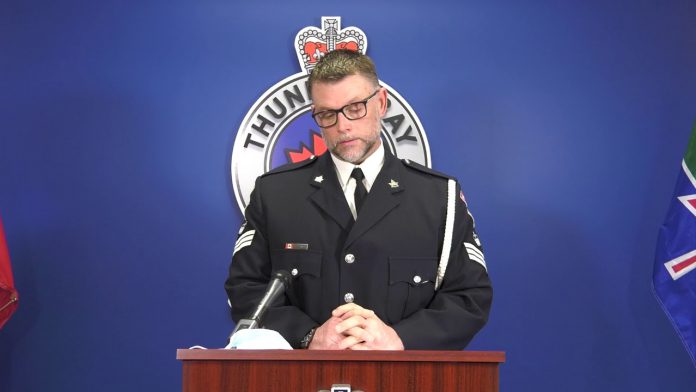 THUNDER BAY – NEWS Insight – Reporting news represents keeping a balance between what is right and what is responsible. Crime reporting is one area that NetNewsLedger tries hard to maintain a balance between public safety and police officer safety, and the law.

Why? Often when police are involved in an active situation media posts can provide information to not only the public at large, but potentially to those involved.

Our approach to this came together in 2015 with Thunder Bay Police Service and Project Dolphin.

Here is what we wrote after this major drug operation: “We received reports at NetNewsledger.com early on Thursday morning of efforts by the Thunder Bay Police Service making what many speculated had to be drug raids. Friday’s news from the TBPS of a major joint operation resulting in arrests and seizure of large amounts of drugs prove that those raids which started early Thursday were related to Project Dolphin.

“A decision was made in our coverage, not to report on those first reports of the police raids. There were several reasons, first getting full confirmation of the raids was needed. Second, if the authorities were in the midst of a large drug / crime operation, letting them do their work is important. If NetNewsledger.com had reported immediately on what we had, it could have put police officers, and an operation in greater risk”.

In Project Dolphin, the first search warrants were executed on June 16, . On December 21, 2015 additional arrests were completed.

In other cases, police are actively engaged in an investigation, and are deliberately keeping some information out of the public reporting to allow officers to work to apprehend their suspects. This is completely legal and in the case of law enforcement a common practice.

Often in an investigation, pieces of evidence are not made public to enable investigators to narrow down the search for the suspects.

There is a balance that happens in media, where reporting what is happening and sometimes waiting to report can create confusion in the public. This is where the issue of responsibility comes in. Thunder Bay Police Service have a long-standing media accreditation policy. Accredited media are sent press releases. Thunder Bay Police also post their media releases and other information on their website as well as on social media.

NetNewsLedger asked the TBPS, When Police put out a media release, and name the person charged, what is the proper process?

Thunder Bay Police Service responded, “With some exceptions, as per our policy we will only publicly reveal the name of a charged person after the charges have been sworn before the courts. In cases where a suspect appears in bail court, that part of the process occurs during their appearance. In cases where someone is released prior to their first appearance, it will feature more of a delay.”

Police have to follow rules in order to do their job. Honestly put media has an important role in this process. One of the hardest responsibilities is in following that role with good balance.

NNL: It is our understanding is that the person needs to have been before the courts before the can be named?

What isn’t included in those listings are publication bans. “The daily court lists do not contain details about publication and disclosure bans and may not reflect that were recently granted (i.e., within the last day or two). It is your responsibility to personally check with the appropriate courthouse about whether a case is subject to a publication ban and to comply with any publication bans or other restrictions”.

The Court will take into account who the publication ban is for, the kind of offence and other factors when deciding whether to make the order. A publication ban may be appropriate, for example, to:

There is legislation that puts out the rules governing publication bans. The rules will vary depending upon who is applying for the publication ban and the nature of the proceedings.

Additionally, “The information contained in the daily court lists may not be collected, copied or distributed in any fashion, including for resale or other commercial use.”

There are also laws for youths under the age of 18 where their rights have been expanded.

Thunder Bay Police Service’s Communications says, “The way in which we handle the naming of accused persons is a policy decision and other journalists, (or Facebook users) are not necessarily bound by our policy. If you want to develop a policy of your own that doesn’t adhere to ours, that’s fine by us, but we’d personally suggest getting legal advice for your own best practices. In our opinion, following a policy like ours is the safest option”.

Police officers work with the public, and frankly do so under provincial legislation.

News media is frankly the only industry that has protection under Canada’s Charter of Rights and Freedoms.

2 Everyone has the following fundamental freedoms:

With that protection comes responsibility as well.