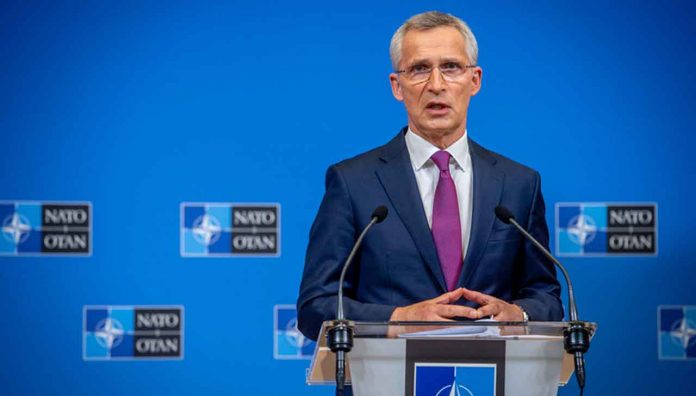 BRUSSELS – NEWS – “They are making absurd claims about biological labs and chemical weapons in Ukraine,” said NATO Secretary General Jens Stoltenberg, who spoke today during a press conference in advance of tomorrow’s meeting of NATO countries’ defense ministers. “This is just another lie. And we are concerned that Moscow could stage a false flag operation, possibly including chemical weapons.”

Stoltenberg said Russia has already staged “false flag” operations within Ukraine to justify its actions there. A false flag operation is a hostile action made to appear as if it were perpetrated by another party, then used to justify other aggressive actions.

“We have seen that they, throughout this crisis, have tried to create different kinds of false flag operations to try to provide excuses for use of force,” Stoltenberg said. “We saw that in the lead-up to the intervention. And now we are seeing them accusing Ukraine and also NATO allies of producing and developing chemical weapons, and that’s an absolute lie.”

The NATO Secretary General said, “Russia’s false claims that Ukraine and NATO operate chemical and biological weapons labs raise the specter that Russia itself may be planning to use such weapons. The President of the United States and other allies also made very clear that if they use chemical weapons, there will be a high price to pay”.

“Russia is one of the nations that signed on to the Chemical Weapons Convention prohibiting the development, production, stockpiling and use of chemical weapons, but it has not held true to the commitments it made there”, Stoltenberg said.

“Russia has used chemical agents before to attack and actually kill political opponents,” he said. “We have also seen that Russia has supported the Assad regime in Syria and helped to facilitate the use of chemical weapons several times in Syria.”

Any use of chemical weapons is absolutely unacceptable, Stoltenberg said.

While Russian aggression continues in Ukraine, Stoltenberg said NATO will do what it’s designed to do: defend the alliance.

“NATO’s core task is to protect and defend all allies,” he said. “We have responded to this crisis quickly, activating our defense plans, raising our readiness, and deploying the NATO Response Force for the first time for collective defense.”

Right now, there are hundreds of thousands of NATO forces on heightened alert. Already, Stoltenberg  said, there are 100,000 U.S. troops in Europe and around 40,000 troops under direct NATO command, as well. Many of those are deployed in the eastern part of the alliance and are backed by major air and naval power, as well as air defenses.

“The U.S. is currently deploying Patriot batteries to Poland and Germany, and the Netherlands are also deploying Patriots to Slovakia,” he said. “All of this sends an unmistakable message: An attack on one ally will be met with a decisive response from the whole alliance.”

Tomorrow’s meeting of defense ministers, Stoltenberg said, will focus in part on a reset of NATO’s military posture in the face of Russia’s illegal invasion of Ukraine.

“Ministers will start an important discussion on concrete measures to reinforce our security for the longer term in all domains,” he said. “On land, this could include substantially more forces in the eastern part of the alliance, at higher readiness and with more pre-positioned equipment.”

Also to be considered are increases to air and naval deployments, the strengthening of integrated air and missile defense, the reinforcement of cyber defenses, and more military exercises for NATO partners.

Stoltenberg also commended NATO nations that are increasing their own commitment to defense — something he said is now truly necessary in the face of Russian aggression.

“Major reinforcements of defense will require major increases in investment,” he said. “I welcome that Germany and other allies have already announced they’re stepping up, and I encourage all allies to spend the minimum 2% of GDP on defense. We must do more, so we must also invest more to protect peace and freedom and uphold our values at this critical time.”

“I welcome the German decision to invest in fifth-generation aircraft,” he said. “We need also to increase readiness and our ability to monitor and detect. And, of course, we also need to make sure that NATO’s nuclear deterrent remains safe and secure and effective.”

When it comes to Ukraine, Stoltenberg said that for many years now NATO allies have been training Ukrainian soldiers — many who are now fighting on the front lines in Ukraine.

And now allies of Ukraine are providing to that country critical equipment — including anti-tank and air defense weapons, drones, ammunition and fuel — to help them in their fight.

“This training and equipment is helping Ukraine to defend itself,” he said. “Ukraine has a fundamental right to self-defense enshrined in the U.N. charter, and NATO allies and partners will continue to help Ukraine uphold that right by providing military equipment and financial and humanitarian assistance.”