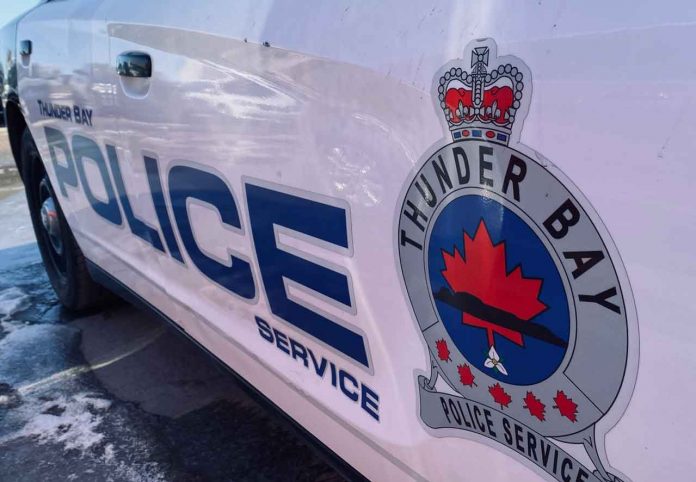 THUNDER BAY – NEWS – Thunder Bay Police report they have arrested and charged a suspect connected to numerous recent break and enters, and an armed robbery.

The first incident occurred just before 12:45 am on Thursday, January 13, 2022 at a business in the 200 block of Bay Street. When police arrived, they found that someone had broken into the business through forced entry, which caused some damage to the business’s property.

Police learned a suspect had entered the business and stolen store merchandise before fleeing the area.

The second incident occurred just after 12:35 pm on Saturday Feb. 5 at a business in the 200 block of Red River Road. Police learned a male armed with a knife robbed staff of store merchandise. He again fled on foot.

Thunder Bay Police Service officers were dispatched to a business in the 200 block of Bay Street just before 7 am on Sunday, February 13th following reports of a break and enter that had just occurred.

Police learned the business had been broken into and an accused had fled with undisclosed store merchandise.

Members of the Break and Enter and Robbery (BEAR) Unit became involved in the continued investigation of the February 5 and February 13 incidents.

As a result of their continued efforts, officers were able to identity a male suspect. That investigation also linked the accused to the January 13 break and enter.

BEAR Unit officers located and arrested the accused at a residential address in the 100 block of Cumberland Street South after 4:35 pm on Wednesday, February 16. He was transported to the TBPS headquarters at 1200 Balmoral Street.

Christopher Tyrone OOMBASH, 36, of Thunder Bay, is charged with:

The accused appeared in court from the District Jail on Friday, February 18 and was remanded into custody with a future appearance date. All accused are considered innocent until proven guilty.