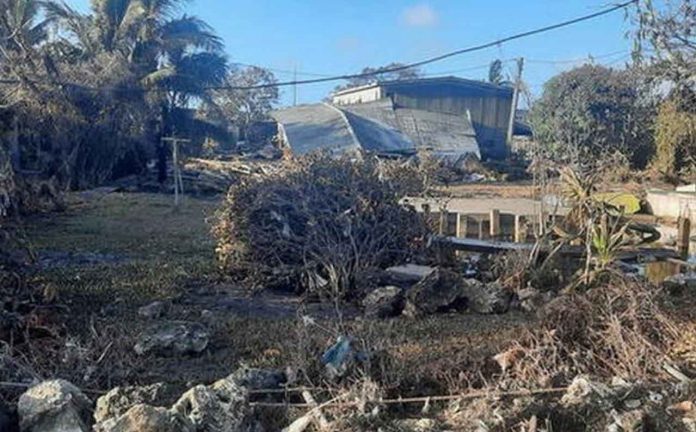 As sea levels continue to rise in coming decades, tsunamis and storm surges will likely be reaching further inland with even more risk of damage

By Kanupriya Kapoor and Gloria Dickie

SINGAPORE – For the South Pacific island nation of Tonga, the tsunami unleashed by Saturday’s volcanic eruption laid bare some of the ways that climate change is threatening the islands’ very existence.

Acutely aware of this risk, Tonga has been a key voice representing climate-vulnerable nations, saying at the U.N. climate talks in November that global warming “beyond the 1.5 C threshold would spell absolute catastrophe for Tonga” and other Pacific Islands as they are subsumed by the sea.

Their plea for global climate action is especially desperate, given that Pacific island nations account for only 0.03% of global carbon emissions, according to the World Bank.

“While we are resilient and trying to adapt, it only takes a few extra meters of water to cover a house, to kill a child or family,” said Shairana Ali, CEO of the international charity Save the Children, in neighbouring Fiji.

Tonga reported that waves of up to 15 meters crashed ashore on its outer islands after the volcanic eruption, flattening homes and killing at least three people. The eruption triggered tsunami warnings across the Pacific.

As sea levels continue to rise in coming decades, tsunamis and storm surges will likely be reaching further inland with even more risk of damage.

“Tsunami surge and storm surge sit on top of sea level,” said Benjamin Horton, who has studied global sea-level rise and is chief of the Earth Observatory of Singapore. So with higher seas, “you won’t need such big natural disasters to cause widespread devastation.”

Sea levels around the archipelagic nation of 105,000 people are increasing by about 6 mm per year, nearly twice the average global rate, according to the U.N.’s Global Sea Level Observing System. This is because the islands sit in warmer waters near the equator, where sea level rise is more pronounced than at the poles.

The damage from tsunamis and storm surges doesn’t stop at wave destruction. Sea water that washes ashore can taint agricultural soil and leave it useless for years. Tsunami waves also exacerbate coastal erosion and destroy natural buffers against rising seas, such as coral reefs and mangroves.

With climate change warming the ocean’s surface, such storm surges are more likely as the warm water fuels increasingly powerful cyclones. Tonga and neighboring countries were battered by two category five cyclones in the last four years, resulting in hundreds of millions of dollars in damage.

Tongan temperatures are already rising, with the average daily temperature now 0.6°C higher than it was in 1979. The frequency of hot days and hot nights has gone up across the Pacific.

That continued warming is likely to make the soil drier as high temperatures cause more evaporation and affect regional rainfall patterns, according to the U.N.’s Intergovernmental Panel on Climate Change.

The country will likely experience more heat waves in the next few decades, with temperatures frequently breaching 35°C, the report found. That extreme heat can be especially dangerous when combined with tropical humidity.

Sea waters are heating up too, at three times the rate of the global average, World Meteorological Organization data shows. And marine heatwaves – which can kill fish and corals – are becoming more frequent, more intense, and lasting longer in most of the Pacific Ocean.

Tonga itself saw a large blob of ocean heat form southeast of its islands in January 2020, with surface water temperatures registering 6 degrees Celsius above average for that month.

REBUILD OR MOVE ON?

Pacific Islanders are expected to be among the first groups of global climate refugees, as the effects of climate change push them out of their homelands.

“Maybe it will eventually come to that. But I hope not,” said Josephine Latu-Sanft, a Tongan who now lives in London and works as a climate communicator. “People don’t want to move.”

Tongans have already rebuilt their communities twice in recent years – following Cyclone Gita in 2018, and again after Cyclone Harold in 2020.

“Tongans are very resilient,” and are reluctant to leave the islands despite the risks, Latu-Sanft said. “We’ve lived there for centuries. Our roots and identity are in the land and in the sea.”

(Reporting by Kanupriya Kapoor in Singapore and Gloria Dickie in London; Editing by Katy Daigle and Richard Pullin)