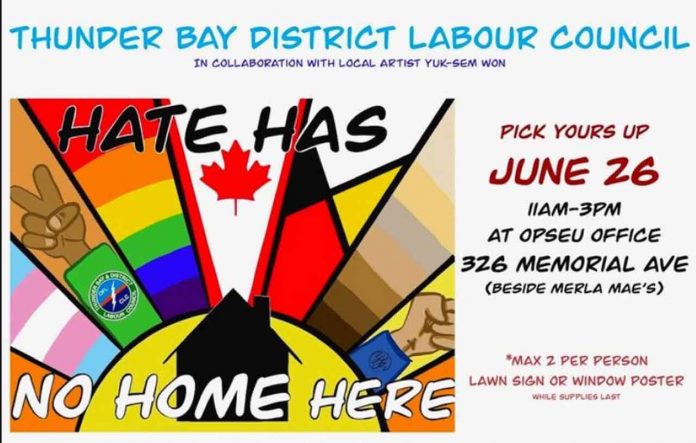 Thunder Bay – The Thunder Bay and District Labour Councils (TBDLC’s) “HATE HAS NO HOME HERE” campaign has wrapped up. With everything going on in Thunder Bay, Ontario and Canada the Thunder Bay and District Labour Council wanted to do more than just make a statement. Our Secretary, Sandra Snider, saw the Hate has no Home campaign from Essex Ontario on Facebook. She approached local artist and community activist Yuk-Sem Won and said we need to do something like this here in Thunder Bay. Yuk-Sem jumped on the idea and created a design of our own. “The actual cost of the lawn signs and posters was sponsored by the Labour Council and the artwork was sponsored by the artist.

$10,050 was collected at these events, that was split between, The Other 10% Youth Group, run from the Children’s Centre, Thunder Bay Multicultural Center, Regional Multicultural Youth Centre, Indigenous Friendship Centre, and the Ontario Native Women’s’ Association for youth programs. Each organization received cheques of $2010. The TBDLC recognizes that youth have been especially hard hit during this pandemic, especially those in equity groups. We wanted to show them our support. support.

“HATE HAS NO HOME HERE” is a movement and is being done across North America. According to the Chicago Tribune article dated Feb 2, 2017 “It all began in the fall of 2016, when North Park residents wanted a peaceful poster to hang in windows. They agreed it should counter the divisive nature of the conversation surrounding the presidential election. The slogan “Hate has no home here” was suggested by a third-grader. There have been campaigns across North America. Numerous cities in Ontario such as London, Essex, Oakville, Belleville and now Thunder Bay have citizens displaying them.

Our sign is just one of dozens of designs, but the message is the same. We hope it has raised awareness of racism and hate in Thunder Bay and area and will make us more aware. It is heartwarming to see them across the city and as far west as British Columbia and as far east as Nova Scotia.