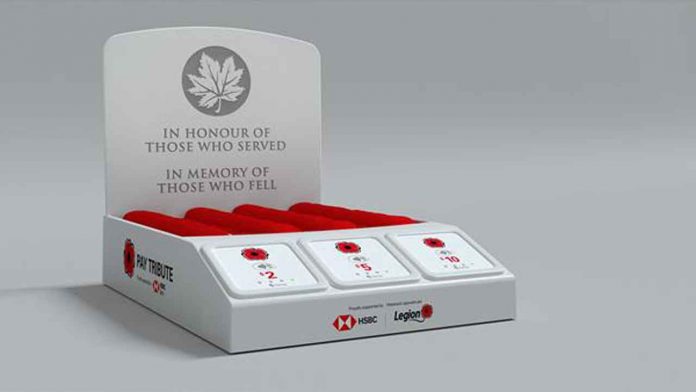 Donors will once again have the option of touchless donation during The Royal Canadian Legion’s 2021 National Poppy Campaign which begins on October 29. After the pilot project introduction of the HSBC “Pay Tribute” electronic boxes in 2020, an updated version of the boxes will be released for the 2021 campaign.

“Generous donors will have the option of tapping two, five or ten dollar amounts and they can tap more than once to increase their donation,” says Bruce Julian, Dominion President. “Feedback from last year told us that people wanted this flexibility and we were pleased to work with great partners to make it happen.”

The HSBC “Pay Tribute” boxes are presented in partnership with HSBC Bank Canada, and will be found in a number of locations including all HSBC Bank branches, some Legion Branches, and select retail locations. The 1000 boxes will provide national coverage, as compared to 250 units tested last year. Since fewer people are carrying cash, the “Tap to Give” boxes make it easier to contribute.

“We are proud to continue our work with The Royal Canadian Legion, offering additional fundraising channels for Canadians to donate in an easier and more convenient way through our contactless HSBC Pay Tribute boxes,” says Larry Tomei, Executive Vice President and Head of Wealth and Personal Banking at HSBC Bank Canada.  “The poppy is a symbol of remembrance and a recognition of sacrifice, and I encourage all to donate to the Legion and wear a poppy to show your support and respect for our Canadian heroes and their families this Remembrance Day.”

The updated electronic boxes will accept payments without any fee to the donor, from tap-enabled devices or cards. The technology at the root of the updated box was developed by “tiptap,” a Canadian company that has created a simplified system for contactless donations. Donations are made securely as soon as a person taps to give.

Donors will be able to pick up a lapel Poppy right at the electronic box. Funds donated across the country during the National Poppy Campaign are used to support Veterans and their families. Funds donated locally are used locally.

Donors can visit www.hsbc.ca/paytribute to learn more and find an HSBC Pay Tribute box in or near their community.

About The Royal Canadian Legion

Founded in 1925, the Legion is Canada’s largest Veteran support and community service organization. We are a non-profit organization with a national reach across Canada as well as branches in the U.S. and Europe. With close to 250,000 members, many of whom volunteer an extraordinary amount of time to their branches, our strength is in our numbers.