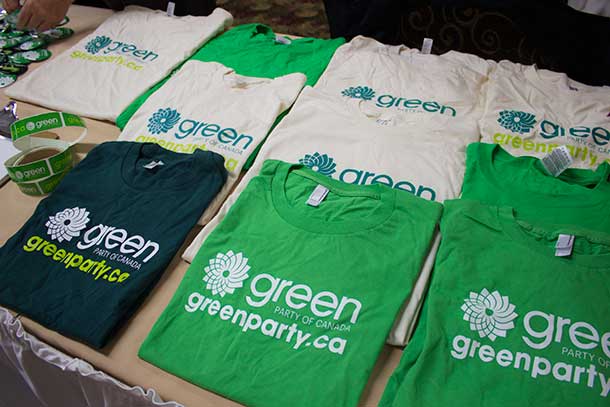 VANCOUVER – POLITICS – Green Party of Canada candidates gathered to emphasize that the climate emergency is the number one issue in this election.

Each explained that they are running for the Greens because of the urgency of the crisis. Humanity is running out of time to avoid catastrophic levels of global heating.

Dr. Devyani Singh, in whose riding the press conference took place, noted, “In the heat dome earlier this summer, an estimated one billion sea creatures died along our shores. The climate emergency is pushing iconic species of Pacific salmon toward extinction. It is ‘Code Red for Humanity’ and for millions of other species. But only one species created the problem and has capacity to solve it.”

“It is unconscionable that the mainline political parties are treating the climate crisis as a low priority, mentioned, but not central to their platforms.  Following this summer of death and destruction from heat waves and wildfires, I had thought the climate emergency would be the major focus of this campaign. But once again, the establishment parties are unwilling to face the reality and do what must be done,” said former Green leader Elizabeth May, candidate in Saanich-Gulf Islands.

Maureen Curran, Green candidate running against Jagmeet Singh, who has literally being living in the forest canopy to stall the construction of the government-owned TMX pipeline said, “Building pipelines in a climate crisis is reckless and a massive waste of funds.  We need to redirect our efforts into projects that will safeguard a healthy, livable future for our children.  It is time for governments to stop fighting the people who are trying to build a safer, successful and greener Canada and realize we should be allies.”

Dr. Cheryl Matthew from the Simpcw First Nation, running as candidate in Vancouver East underscored, “The Pacific Salmon run is endangered and has been detrimentally impacted by rising ocean temperatures from climate change, impacts from industry and logging. TMX being pushed through the current resistances from First Nations will detrimentally affect sensitive marine habitats and push Canada way beyond its 2050 carbon emissions targets. First nations should have better economic choices than boom and bust short term pipeline projects and an undue reliance on oil and gas.”

Dr. Farrukh Chishtie, Green Party Shadow Cabinet Climate Change Deputy critic, and a climate scientist with an extensive background, currently a visiting scientist with Environment Canada and Climate Change, agreed that action is overdue and other parties have only set inadequate climate goals, “We have already disturbed our ecosystems with excess greenhouse gases and must limit the warming to 1.5 degrees Celsius by achieving net negative emissions, as quickly as possible. Our Green Party aims to meet this target by 60% reduction by 2030 and going net negative by 2050 with our Green Recovery and Just Transition plans for a sustainable future.”

Mike Simpson reflected on his work in the Global South, “Just as indigenous people in Canada have contributed the least to our oversized GHG emissions and yet are on the front lines of the impacts, people in the Global South are hard hit by a problem not of their creation.

Greens are demanding a meaningful cut in GHG, of 60% reduction below 2005 by 2030, a just transition plan for fossil fuel workers, and the cancellation of TMX, the banning of fracking, canceling fossil fuel subsidies and moving aggressively to replace fossil fuels with renewable green energy, while protecting old growth forests and restoring critical ecosystems as part of climate mitigation and adaptation.  The full Green Party of Canada platform is set to be released next week.