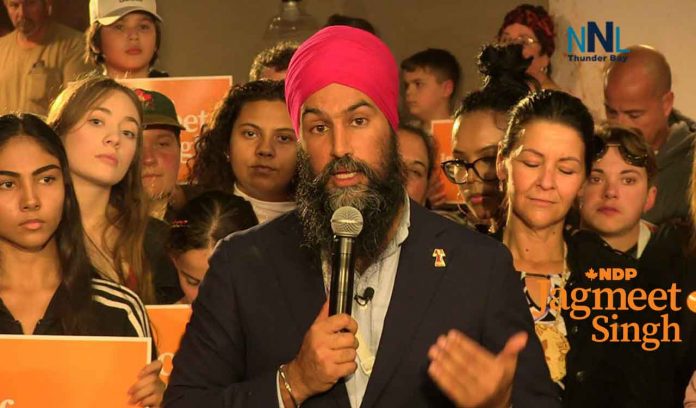 Thunder Bay – POLITICS – “Millions of Canadians can’t afford to take the medications they need. They skip doses, cut their pills in half, or even go without medication entirely,” said Jagmeet. “For more than two decades, the Liberals have promised to bring in pharmacare. It’s a life and death situation, but after six years, Justin Trudeau has refused to take a step toward making his pharmacare promises a reality.”

The NDP’s plan would save an average family $550 a year states the party.

Won and Bryson say that Jagmeet and the NDP’s plan to cover prescription drug costs will help make life more affordable for everyone in Thunder Bay and the Northwest.

“Families in the Northwest shouldn’t have to worry how they’re going to pay their bills after they pay for their medications,” says Won.  “After six years in government, Justin Trudeau failed to lower drug costs for families. New Democrats will expand health care coverage for medicines so you’ll just need your health card, not your credit card when you go to the pharmacy. “

“During this pandemic everyone is working harder than ever to pay the bills but the costs keep going up,” added Bryson “ Cutting the cost of prescription drugs saves everyone money. Seniors, families and young people get a break.  Small businesses who want to provide coverage for drug costs are able to do it.”

Jagmeet’s plan would expand healthcare to include quality prescription drug coverage for all Canadians, regardless of their job, age, location, health status or income. By negotiating prices with pharmaceutical companies, an NDP government would help make prescription drugs free. This would also save provincial health systems money, help employers save money on employee benefits, and help Canadians stay healthy.

The NDP say that “Canadians pay the third highest prices for prescription drugs in the world. Trudeau has failed to stand up to big pharmaceutical corporations and fight for regular families.

“Canada is the only wealthy country in the world that has a universal health care system without universal prescription insurance coverage,” stated Singh. “Justin Trudeau promised to lower drug costs in 2016. Instead of keeping his promise and helping to make life more affordable for people, Trudeau sided with big pharma and helped them jack up their corporate profits.”