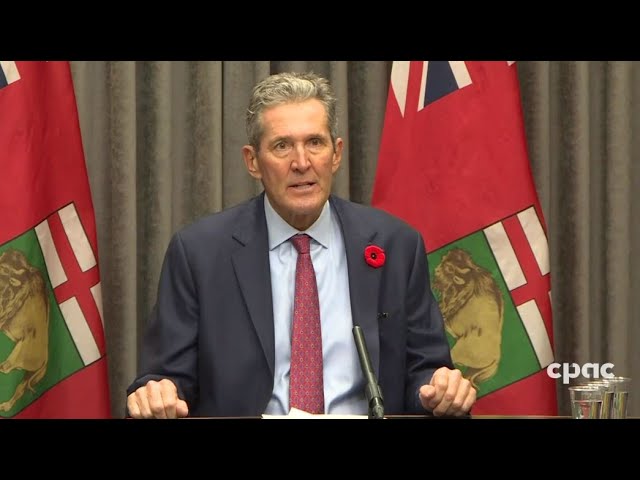 WINNIPEG – POLITICS – Premier Brian Pallister has told his caucus he will not be seeking a seat or running in the next election.

“I have informed my caucus colleagues that I will not be seeking re-election as a member of the Manitoba Legislative Assembly. After almost 10 years as the MLA for Fort Whyte, and more than five years as our province’s premier, I believe now is the time for a new leader and premier to take our province forward. The honour of my life has been serving as your premier”, said Pallister.

In a press statement, Pallister states:

Manitobans have gifted me with the great privilege of leading our province with the two largest back-to-back majority governments Manitoba has seen in over a century.

Our team entered office facing enormous challenges from the very beginning. We charted bold new directions to fix the finances repair our services, and rebuild the economy of Manitoba.

We introduced the first balanced budget in 11 years, while creating the largest ongoing per person investment in health care, education, and family services of any province.

We did this while lowering the tax burden on every working person and family, more than any other province, to keep making life affordable for Manitobans.

Most important of all, we did what we said what we would do. We are a clean government with integrity. I am most proud of that.

Together, Manitobans faced an extraordinary challenge like no other this past year and a half of this pandemic. Our government had to make difficult, unprecedented decisions each and every day; decisions to keep people safe, protect our hospitals and the health teams who work in them, and support businesses, communities and individuals.

But now, through our collective efforts, Manitoba is poised to recover stronger than ever. Our vaccination rates lead the country. Our job growth leads the country. Today, Manitoba is incredibly well-positioned to springboard into a stronger economic future with even greater social progress.
That is why I believe this is the right time for me personally to turn the page and allow a new leader and premier to go that next step and lead Manitoba into a new chapter of progress.

I have been honoured and proud to serve with a dedicated team in government.

I am incredibly optimistic about our future as a province.

I want to thank the people of Portage la Prairie who gave me my start in politics almost 30 years ago, and the people of south-central Manitoba who chose me three times as their Member of Parliament.

I want to thank the fine people of Fort Whyte who elected me three times as their MLA.

I got into politics to fight for the survival of my community when it was facing severe economic challenges.

That is how I endeavoured to serve as Manitoba’s 22nd premier.

But both were the right decisions. Then and now.

But now, it is time to move on and spend that extra precious time I missed over many years, with my family.

I want to thank Esther, Quinn and Shawn for their love and support each day, over all these years.

To every Manitoban, I wish you the very best in all you aspire to be. Your hopes and dreams will always be close to me.

I love Manitoba. I love Canada. We live in a country and province of endless opportunities.

That is why I say to you: the only thing better than today in Manitoba, is tomorrow in Manitoba. Thank you.”