Home Technology How An Engineer Changed Career Paths To Create His Own Content And... 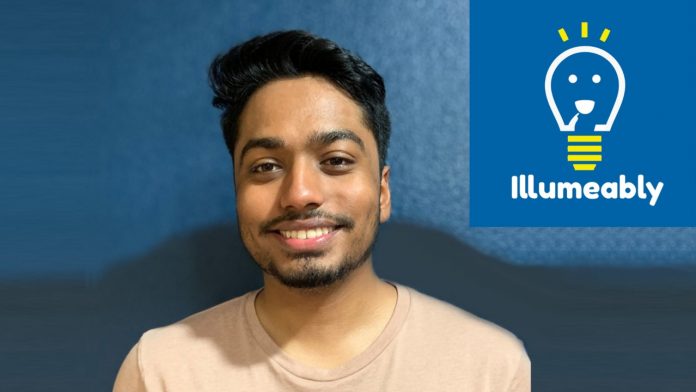 Illumeably Media doesn’t come across as a traditional media company at first glance. The name itself is like a tongue twister but 7 out of 10 people would have watched a video or read an article by Illumeably. Today it is ranked in the top 500 news sites of the world and generates revenue in 7 figures. Just like its name, the story behind the conception of Illumeably is unconventional.

Known for its motivational video content across Facebook and YouTube, it began as an escape from the rut of a 9-5 job. Illumeably was founded by Rishi Jethi in 2017 after graduating with a degree in computer science. Rishi was struggling to find purpose but since his life had been full of risks, he knew one thing about himself and it was that choosing a safe option was not for him.

Belonging to a conservative Indian household, Rishi had to bear the burden of his parents’ expectations. He came from a family where anything less than a Grade A was unpardonable but he still became a high school dropout. He was trailing an uncharted territory for most Indian kids but he was not about to live a less than exciting life. Remembering full well how his mom broke down in the principal’s office thinking about his future, he chose the unexpected path. Not knowing what future had in store for him, he assured her that he would make the best decision for himself.

A couple of months later, Rishi started an engineering internship and post that, he was accepted into University of California, Berkeley, the number 1 public university in the world. Rishi didn’t expect to be at any of these places and yet, he was able to break out of the mold regardless of how tough the situations got. So when he graduated from Berkeley, these were the very things he reflected upon while making a career choice. In his heart he knew he needed to tell his story because he believed that it could inspire others to conquer the hopelessness about their future. Something inside him told to make a video about how perseverance helps in battling any hurdles that life throws at us. The next day after posting the video on Facebook, Rishi found out that it was viewed by over 5 million people and shared more than 100,000 times.

The numbers were way beyond his expectations and he lit up immediately when he realized making his real purpose. Utilizing the last $500 he had saved from his internship, he founded a media company that aimed at uplifting others and bringing light into their life with its content. Today Rishi Jethi creates unique content not just for his website but also for his YouTube channel where he features path-breaking stories of people who chose to do the right thing against the testing situations. His content has become a daily dose of motivation for millions of people across the globe.

He was so moved by this idea that when it came time for him to decide on a name, he wanted to incorporate the word “illuminate”. That’s how Illumeably was born, bearing the prefix “illume” and the idea of illuminating the lives of others.