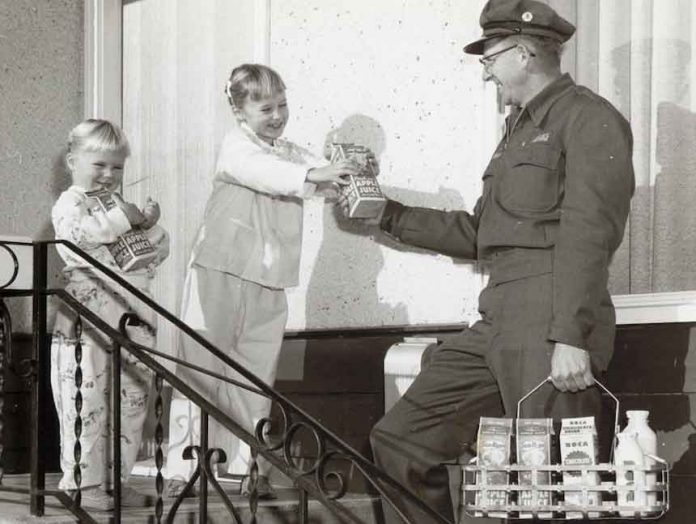 SunRype (“SunRype”) announced that they are celebrating 75 years as a long-standing Canadian brand that has been providing families across Canada with fruit juices and snack products since 1946.

SunRype grew out of the fresh fruit business in the Okanagan Valley of British Columbia when B.C.’s fruit growers created a company called BC Fruit Processing Limited and bought two juice plants in Kelowna, B.C. They began turning apples, straight from their Okanagan orchards, into 100 per cent apple juice and applesauce. They named the apple juice SunRype. By the mid 1950s, the SunRype brand had become a household name in Western Canada, resulting in the company renaming itself in 1959 to Sun-Rype Products Ltd.

“We’re extremely proud of SunRype’s 75 years of rich Canadian history, and its brand legacy of being a trusted, family favourite brand that is still rooted in the orchards of B.C.’s beautiful Okanagan Valley. This is definitely a milestone anniversary worth celebrating,” said Lesli Bradley, SunRype President. “We are also really proud to acknowledge that since 1946 our brand commitment has gone beyond providing active and busy families with convenient and healthy products – it’s also about the communities that we are involved in and support. SunRype has been an active and generous contributor to many local, provincial, and national groups including Food Banks, JDRF, Kelowna Gospel Mission, the United Way, YMCA, BC Cancer Society, and a range of youth sport organizations as well.“

In recognition of the 75th anniversary, SunRype has partnered with Food Banks Canada and their After The Bell Program. The After The Bell program responds to child hunger, and is providing 150,000 healthy, child-friendly food packs, which will include SunRype’s Fruit to Go snacks, to Canada’s most vulnerable children when school food programs are closed throughout the summer of 2021.

“In celebration of our 75th anniversary, we are excited to partner with the After The Bell Program. Our company has always been committed to giving back to our communities and helping families live healthier and happier lives. During these unprecedented pandemic times it is even more critical than ever before to ensure that our children in need have access to wholesome food,” said Bradley. “The Fruit to Go snacks and monetary contribution that SunRype provided to the After The Bell program will have a positive impact on thousands of Canadian children this summer.”

To learn more about Food Band Canada’s After The Bell program visit https://afterthebell.foodbankscanada.ca.

SunRype currently has over 400 employees that operate out of its original 1946 Kelowna-based plant, which has expanded to a 143,000 square foot facility. It includes apple processing equipment, six beverage packaging lines, a can line, and three food production lines. The brand is best known for its Blue Label, not from concentrate, pure apple juice, which is the number one selling apple juice in Canada. SunRype also produces 100 per cent fruit snacks named Fruit to Go and FruitSource. Over the years the brand has added several additional fruits to its juice line-up, as well as a variety of fruit snacks and new product categories that go beyond fruit. SunRype’s snack lineup is gluten free, nut free, and vegan.

5 Tips to Going on a Wine Tour in Kelowna