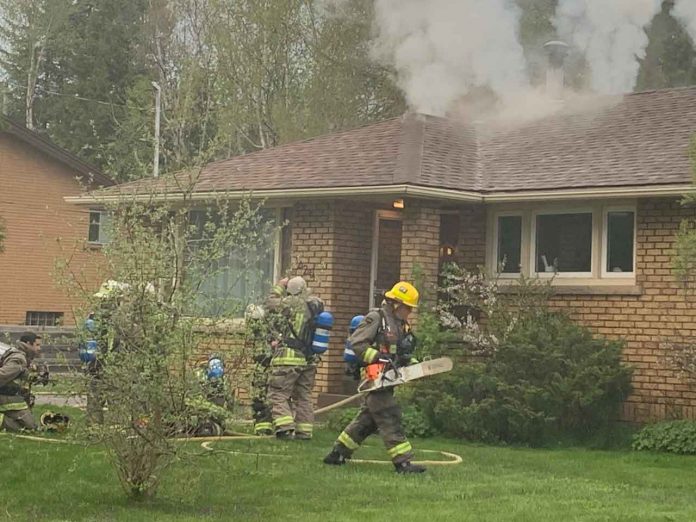 Thunder Bay – NEWS – On May 23 at approximately 9:00 pm Thunder Bay Fire and Rescue responded to a report of a house on fire on Nelson St.

The 911 call came from a neighbor who reported the house beside his had flames and smoke on the roof and the occupants were being evacuated from the home.

Platoon Chief John Kaplanis reports, “The first fire crew on scene encountered heavy smoke and flame coming through the roof of the home and they began an aggressive interior attack on a fire located in the attic space of the home. A second alarm was dispatched for additional fire personnel and apparatus to attend the scene”.

Fire crews were able to quickly knock down the fire in the attic and prevent any further fire damage to the remainder of the home.

Fire fighters confirmed that the occupants of the home had evacuated the house safely. The occupants were located on site and were evaluated by EMS personnel on scene as a precaution.

There were no injuries to civilians or fire fighters as a result of this fire. Fire damage to the roof of the home was extensive, and the interior of the home suffered significant water and smoke damage. The cause of the fire was determined to be the result of a chimney fire that had extended into the attic and roof portion of the home.

TBFR responded with a total of 6 pumpers, 1 aerial ladder, and 1 command vehicle. Homeowners and tenants are reminded that working smoke detectors are required by law on all levels of a residential occupancy.