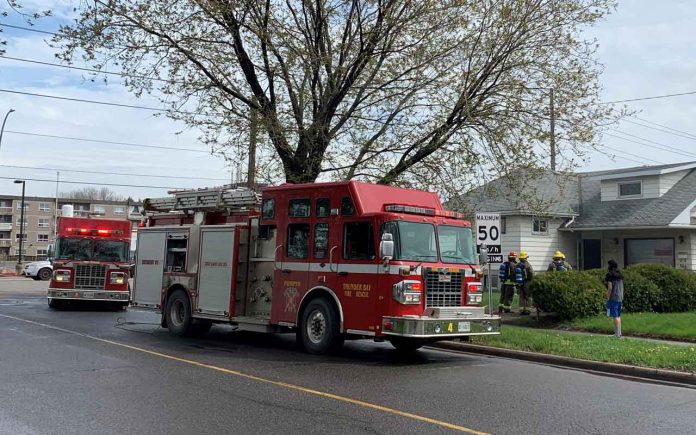 Thunder Bay – NEWS – At approximately 11: 45am today, the tenant of a Brown St. residential occupancy was able to self-evacuate from their home after a grease fire in the kitchen got out of control.

The lone male occupant called 911. TBFR Pumper 4 of Fire Station 4 (located on James St) was able to arrive on scene within 3 minutes of receipt of the alarm.

The initial arriving TBFR Pumper crew found heavy smoke billowing from the home upon their arrival on scene. Fire fighters accounted for the lone occupant of the home immediately as additional crews arrived on scene to assist in the fire attack. Fire fighters were able to gain control of the kitchen grease fire very quickly, thus preventing further damage to the structure.

There were no injuries to civilians or fire fighters. However, there was moderate damage to the home, mainly due to smoke from the fire and from water that was applied during fire-fighting activities.

The cause of the fire was deemed accidental due to cooking. The home was turned over to the occupant and the home owner.

Home owners and tenants are reminded to make sure they have working smoke detectors on all levels of a residence. Additionally, TBFR would like to take this opportunity to remind people not to leave their cooking unattended. If a cooking fire grows out of control, evacuate the residence immediately and call 911.