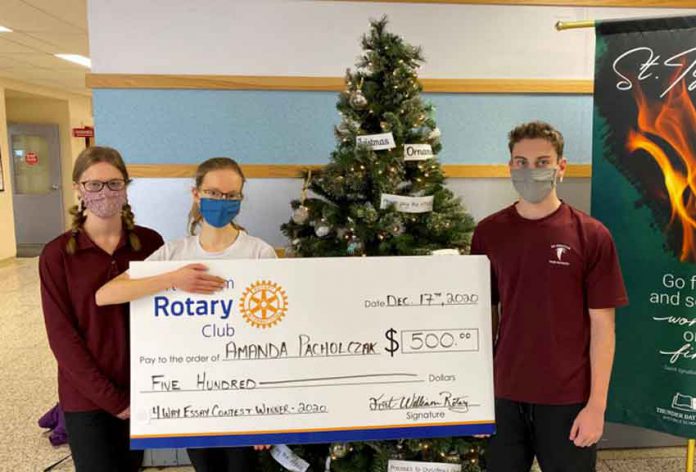 Thunder Bay – Amanda Pacholczak, a Grade 12 student at St. Ignatius High School Thunder Bay was awarded the $500 top prize in the Rotary 4-Way Test Essay Contest. She applied the principles of the 4-Way Test in her essay titled “Vacationing Abroad: Ethical or Not”.

In addition to this top award, Pacholczak’s essay will be entered in the Rotary District 5580 Essay Competition for an opportunity to win another $1,100 USD.
In addition to Amanda Pacholczak’s first place prize, Veronica Pacholczak was awarded a $200 prize for second place, and Spencer Lenardon was awarded a $100 prize for third place. All three prize winners are Grade 12 students at St. Ignatius High School.

Rotary is the world’s largest and oldest humanitarian service network. There are four local Rotary clubs in the Thunder Bay and Nipigon area and a Thunder Bay Rotaract club. Membership includes and welcomes individuals who are interested in serving their community and making a difference in our world. Our clubs work to serve and financially support local and international initiatives with a primary focus on health, water and sanitation, literacy and education, community development and peace.

The essay can deal with any topic of the student’s choosing, but it must apply the principles of the Rotary 4-Way Test:

The Rotary 4-Way Test was first conceived in 1932 at the height of the Great Depression by a Chicago businessman who was faced with the challenge of saving a major company from bankruptcy. Looking for a way to save the company, he sought a short yardstick of ethics that could be used. Company personnel were asked to learn the test and to observe it as a guide to every aspect of business. As a result, a climate of trust and goodwill gradually developed among dealers, customers and employees, and the 4-Way Test was credited with returning the company to a thriving status.

Amanda Pacholczak’s winning essay was chosen by a panel of judges from the four local Rotary Clubs and the local Rotaract Club. Her essay is now being submitted to compete against essays coming from the remainder of the Rotary 5580 District , which includes North Dakota, Northern Minnesota, and Northwest Wisconsin.

For more information, please go to www.rotary5580.org or the Social Media channels of the four local Rotary Clubs and Rotaract.