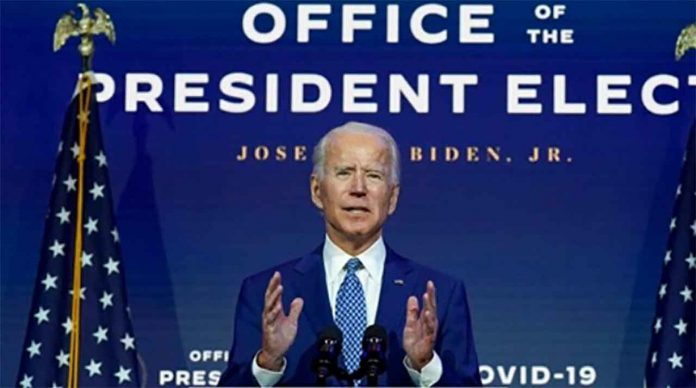 The power disaster unfolding in California will soon occur across the country if Joe Biden gets his way. Just as the former Vice-President plans for America as a whole, the Golden State is sweeping away the forms of energy that have been reliable for decades. Power outages are now commonplace in California. Last summer, the state suffered its first rolling blackouts in nearly 20 years. Imagine if this happened in Chicago in the middle of winter.

California’s trouble is explained by officials who now openly admit to an over-reliance on wind and solar power. The governor said there was not enough wind to keep the turbines going with cloud cover and nightfall restricting solar power. The Los Angeles Times reported:

“… gas-burning power plants that can fire up when the sun isn’t shining or the wind isn’t blowing have been shutting down in recent years, and California has largely failed to replace them …”

Consequently, the state has fallen thousands of megawatts behind its needs. Governor Gavin Newsom said, “we failed to predict and plan for these shortages” and took responsibility for the rolling blackouts. He wants everyone to conserve while they look for new sources of energy, likely fossil fuel-generated power from neighboring states.

All this is happening while California continues its intent to transition to 60% renewable energy by 2030 and 100% “climate-friendly energy” by 2045, as required by state law. Indeed, in their October 6th open letter to Newsom, the heads of the California’s Energy Commission, Independent System Operator and Public Utilities Commission wrote: “We are unwavering in our commitment to meeting California’s clean energy and climate goals.” And, Biden plans to go even further, committing to making the nation 100% renewable within 15 years.

California’s shift toward so-called green energy, which is actually anything but, is being echoed by politicians across the nation. The result, especially in states that don’t enjoy California’s mostly benign weather, is going to be that those in the poorest neighborhoods and those on fixed incomes may be forced to choose between heating or eating.

Coherent energy systems are designed with the understanding that portions of the system will be offline from time to time. Thus, one compensates for this with reserve power at the ready. However, California has closed its margin for error in response to anti-nuclear sentiments and climate change concerns.

Power outages cannot always be avoided and are more common than one may think. For example, Illinois had 871 outages, the 10th most by state, between 2008 and 2017. Texas had nearly twice as many, giving it the dubious distinction of ranking number two in the list. But these pale in comparison to California which has the least reliable electrical power system in the nation. It leads in power outages every year. Between 2008 and 2017, they had 4,297 power outages.

The origin of the problem is partly California’s Senate Bill 1368 which, in 2006, established the state’s emission standards to reduce greenhouse gases from power plants. Following that year, 11 coal-fired plants were closed and three were converted to biomass. Only one remains. The state also reduced its normal reliance on energy from out of state coal plants.

Yielding to anti-nuclear activists, the state closed all but one nuclear plant, Diablo Canyon, as well. That plant generates fully 8.6% of California’s total generation electricity every year.

But Diablo Canyon will soon be closed too. In 2016, the California Public Utilities Commission approved a Joint Proposal to phase out the remaining nuclear power in the state. So, the operating licenses for Diablo Canyon’s two units will not be renewed when they expire in 2024 and 2025. Ironically, the Commission did not approve Pacific Gas & Electric’s proposal for resources to replace the station’s output.

And it gets worse. California wants all citizens to switch their natural gas stoves to electric as part of their global warming initiatives. More than 30 cities have already enacted bans on gas appliances including San Francisco. The state is also hoping to eliminate all gasoline and diesel cars in favor of plug-in electric automobiles.

So, just as Biden promises for the country as a whole, California is sacrificing reliable electrical power as part of their impossible crusade to ‘stop climate change.’ If more rational heads don’t soon prevail, blackouts are indeed coming.