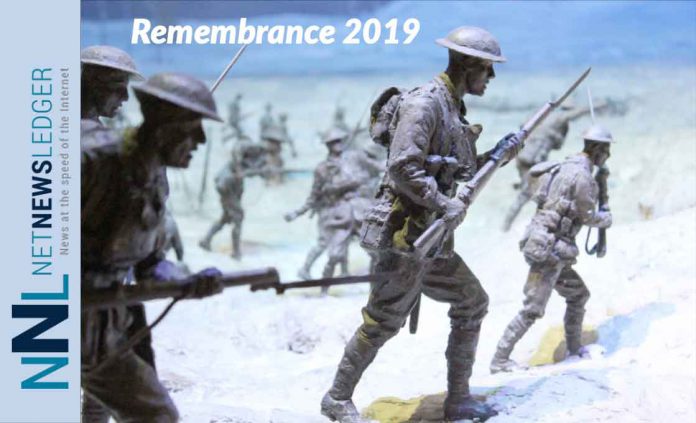 EDMONTON – Sean Borle, 24, recalls meeting Second World War veteran Lloyd Brown, 96, for the first time six years ago at a Remembrance Day ceremony. “We had this magical moment where I reached out my right hand and he put out his left, to shake hands,” he says.

Borle was born missing his left hand, and Brown lost his right arm on October 18, 1944, while serving with the Loyal Edmonton Regiment in Italy. “I was staked at a farmhouse which had a children’s treehouse located behind it,” says Brown. “In the treehouse was a sniper who kept shooting at our boys. A tank then came which shot out shells, the shrapnel hitting my right arm.”

When Brown arrived at the hospital, the doctors had to amputate his arm. “Fortunately, I was in such shock that I didn’t feel a thing,” he recalls.

The ability to find the positive in a dark situation is one reason why Borle admires Brown. On Remembrance Day, the pair share a special tradition of laying a wreath on behalf of The War Amps, an organization entering its second century of service this year.

The War Amps was started by war amputee veterans returning from the First World War to help each other adapt to their new reality as amputees. They then welcomed amputee veterans following the Second World War, sharing all that they had learned.

Borle grew up in The War Amps Child Amputee (CHAMP) Program, which provides financial assistance for the cost of artificial limbs, emotional support and regional seminars to young amputees across Canada. It was started by War Amps Members, like Brown, who realized their experiences of living with amputation could help others.

Through what they call “Operation Legacy,” Borle and his fellow members of CHAMP have now “taken up the torch” of remembrance to pay tribute to the veteran members of The War Amps, whose efforts have made a difference in the lives of thousands of amputees.

“I can’t overstate the impact that these programs have on young amputees and their futures,” says Borle. “Knowing that there are people like Lloyd who understand what it’s like to be missing a limb, makes you feel like you’re not alone.”

When Brown attends the Remembrance Day ceremonies, he reflects on all those in his regiment who never came home. “It’s heartbreaking to think of all those who lost their lives and it’s important to remember them,” he says.

For Borle, it’s special to share Remembrance Day with Brown. “I would not be the person I am today had it not been for that decision more than 100 years ago to begin The War Amps,” says Borle. “It is our commitment as Champs that the legacy and sacrifices of Lloyd, and all the war amputee veterans, will be remembered and carried forward.”