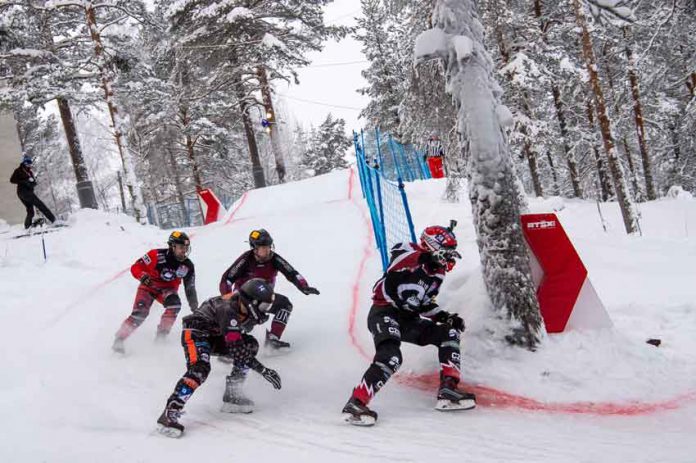 RAUTALAMPI (Finland) – Cameron Naasz from the United States reclaimed the overall lead in the Ice Cross Downhill World Championship with a victory in frosty Rautalampi, Finland in an ATSX 250 race. The two-time world champion, who is eager to win back the championship he surrendered in the 2017/18 season, picked up 250 championship points for finishing ahead of local hero Mirko Lahti of Finland, last year’s junior world champion, in second place and defending champion Scott Croxall of Canada, who took third place.

Naasz, who also won the first Red Bull Crashed Ice race of the year in Yokohama, Japan worth 1,000 championship points last month,  narrowly escaped disaster in the semi-final on the natural ice track when he appeared to be headed for third place and an early exit before Canada’s Shayne Renaud suddenly toe-picked and crashed while racing in front of him just a meter before the finish line. Naasz advanced to the final thanks to that spectacular last-second crash and then won the final to take the overall lead in the 10-race Ice Cross Downhill World Championship after the first three races.

In the women’s race on the challenging yet perfectly prepared track in Rautalampi, Canada’s Jacqueline Legere had a superb race and took first place honours ahead of compatriot Tamara Kajah with Miisa Klemola from Finland taking third place. American Amanda Trunzo, the defending champion and winner in Yokohama last month, remained in first place overall even though she did not race in Finland.

The bulk of the Ice Cross Downhill World Championship racers from more than 20 nations will remain in frigid northern Europe for two more races in the next two weeks. The next race on the schedule is an ATSX 500 race, with 500 points going to the winner, in Igora near St. Petersburg, Russia. That will be followed a week later by the second Red Bull Crashed Ice race of the season in Jyväskylä, Finland with the winner taking 1,000 points home.