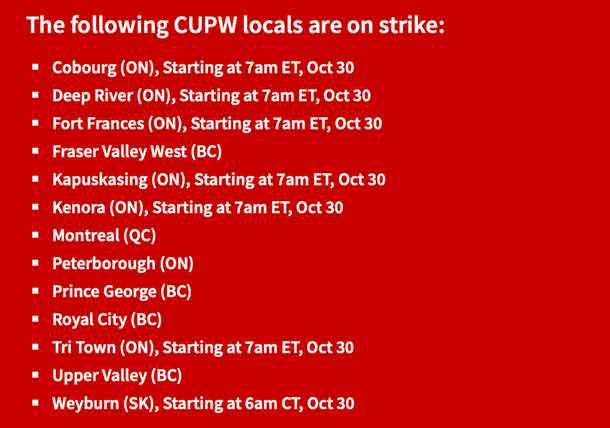 Members of Canadian Union of Postal Workers (CUPW) in Southwestern, Northern and Eastern Ontario walked off the job at 7 am ET, Tuesday, October 30.

Postal workers from the following locals will strike:

Postal workers in Montreal (Quebec), Peterborough (Ontario) and Prince George (British Columbia) who went on strike yesterday, remain on the picket lines, as do members from the Fraser Valley West, Upper Valley, Royal City and Squamish locals in BC.

Workers from Thunder Bay, Pickering and Oshawa in Ontario, returned to work this morning, as did those from Brandon and Winnipeg in Manitoba, Lloydminster (Saskatchewan) and Iles-de-la-Madeleine (Quebec).

Montréal is an important processing hub, so the union’s rotating strike there will have a significant impact on our operations. Canada Post will make every effort to minimize the impact, but customers well beyond Montréal may see delays for parcel and mail delivery. As employees return to work in areas impacted by strikes, it will continue to work to restore service and address any mail and parcel backlogs.

A special mediator appointed by the federal government joined the parties at an offsite location on Wednesday, October 24, and is working to help them reach a negotiated settlement. Canada Post remains committed to the bargaining process.

The Corporation has made significant offers to CUPW that include increased wages, job security, and improved benefits, and it has not asked for any concessions in return.

We value the relationship with the union and have been able to find common ground on some issues. We have also committed to work together to address employees’ workload concerns caused by parcel growth, additional financial services and going beyond pay equity for Rural and Suburban employees by extending job security and moving to one uniform for all delivery employees.

Theft from Community Mailboxes on the Rise in Thunder Bay