Home Entertainment Netflix Asks “How long before you go all the way?” 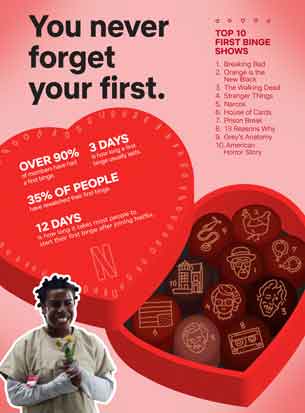 HOLLYWOOD – Netflix has changed how people watch television. So too has Crave TV and Crackle, but for most people, it seems to be binging on Netflix that they talk about. For most people, watching shows, even re-watching shows or long-lost shows on television has become a fairly regular occurrence.

Netflix says that “Canadians are the fastest binge watchers“.

There is a lot of comfort television on Netflix. Those shows you loved long ago. Crave TV is fantastic for that too. There are both new series like The Big Bang Theory to old classics like Friends and Cheers as well as new classics from HBO and Showcase.

There is, of course, a phenomenon of binging out with online television. The various devices from Apple TV to Google, to Roku, offer a selection of options for your viewing that standard cable television doesn’t have. You can pick and choose what channels you want.

It is technology in action and people are adopting it as fast as they can.

Netflix says, “Most people wait until the third date, but globally it only takes two weeks (well, 12 days to be exact) for the majority of Netflix members to go all the way. No, not Netflix and chill. We’re talking about your first time bingeing on Netflix.”

This Valentine’s Day, Netflix wants to help you remember your first time. Ask any of the 90% of members who have done it, and they’ll be able to tell you who it was with (probably Walter White), where they were (on a bus, if you’re MINDHUNTER’s, Jonathan Groff) and how long it lasted (an impressive 3 days around the world, in most cases).

As for the shows that people fall in love with first, bad boys (and girls) came out on top.Breaking Bad is the most popular show that people binged first, with Orange Is the New Black, Narcos, House of Cards and Prison Break not far behind.

We’re also falling for shows that leave us hanging, like The Walking Dead, Stranger Things, and American Horror Story. While shows that aren’t afraid to push boundaries, like 13 Reasons Why and Grey’s Anatomy, round out the Top 10.

Do you remember your first binge?

According to Netflix, these are the shows that Canadian members binge first:

Methodology: Binge defined as completing at least one season of a show within 7 days of starting. The analysis focused on members who joined in the past five years. All TV series were included except for Kids/Family content and seasons with fewer than 5 episodes. More than 90% of Netflix members who have been a member for at least one year have completed a first binge.