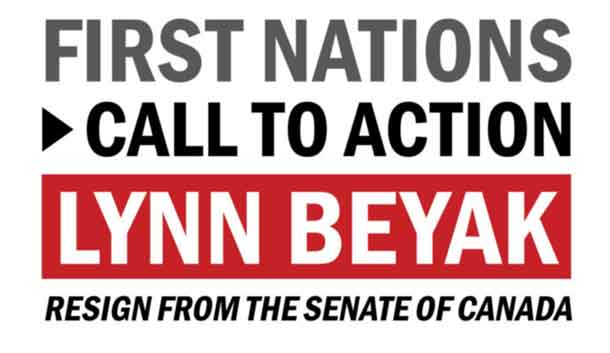 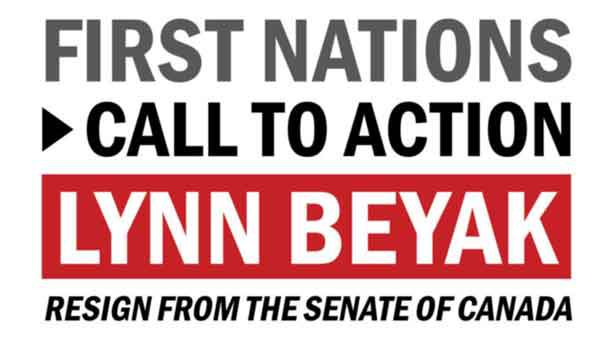 THUNDER BAY, ON: Nishnawbe Aski Nation (NAN) Grand Chief Alvin Fiddler and Grand Council Treaty #3 (GCT#3) Ogichidaa Francis Kavanaugh have launched a nation-wide campaign and website calling for the Hon. Lynn Beyak to resign as a member of the Senate of Canada.

“Senator Beyak’s shameful defense of the Indian Residential School system is unbefitting for a member of the Senate. Her lack of knowledge and empathy for the horrors of the Residential School experience is offensive to Survivors and all the children who were lost. The Senator is entitled to her personal opinions, but we are appalled that such inaccurate, racist and spiteful sentiments are being expressed by a representative of Canadian Parliament,” said Grand Chief Fiddler. “Her repeated defense of the Residential schools is insulting, and makes a mockery of Canada’s efforts towards reconciliation. We call on all First Nations and our allies, the broader communities in Dryden, Kenora and Thunder Bay to join as we petition for Senator Beyak’s resignation.”

“There is no other way to describe Senator Beyak’s views but as deplorable,” offered Ogichidaa Kavanaugh, who has signed the petition along with Grand Chief Jerry Daniels of the Southern Chiefs Organization of Manitoba.

NAN and GCT#3 are dismayed that a member of the Senate hailing from northwestern Ontario, an area spanning NAN and GCT#3 territory with one of the highest concentrations of Residential Schools in Canada, is oblivious to the devastating legacy of these institutions, and the intergenerational effects they continue to have in First Nation communities. Options will continue to be looked at regarding the removal of Senator Beyak from Senate.