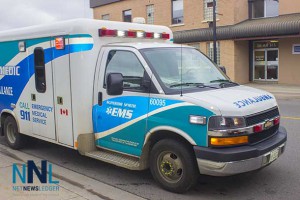 THUNDER BAY – The small amount of snow had a serious impact on many people and on resources within Thunder Bay on Tuesday.

In daylight hours during Tuesday’s snowfall, Superior North Emergency Medical Service (EMS) paramedics responded to 61 emergencies, of which 18 were falls related to the snowfall. This was a relatively high call volume with an extraordinary amount of “slips and falls”. Many of these falls resulted in strains and broken bones. During this time period, there was longer paramedic response times to low priority calls.

To deal with demand, EMS “upstaffed” with four additional paramedics in two additional ambulances. The TBRHSC and SNEMS worked together to manage the high volumes.    Teamwork ensured that patients were seen as needed.

“While there some longer response to non-life-threatening calls, our paramedics responded to every call,” said Deputy Chief Don Stokes. “Upon arrival at Emergency, we worked with TBRHSC leadership to ensure that patients were seen appropriately.”

“In all conditions, but particularly conditions with ice covered by fresh snow, people should take care,” said Norm Gale, Chief of EMS. “The elderly and frail are particularly at risk of injury, including fractures and dislocations.”

Deployment:  Paramedics will respond to every 9-1-1 call, some low priority calls will have longer response times however in busy periods.

Part of the issue, especially in the downtown areas where snowbanks are left from winter is that melting snow has no where to go but gather on the sidewalk. With the cold temperatures freezing any puddles, and a dusting of wet snow, conditions were there for slips and falls.

The potential liability for the City of Thunder Bay is unknown.

Code Black a Sign of the Times for Superior EMS