The Guardian Angels are not security guards, and they certainly are not trying to replace the police. Rather the goal is putting a civilian presence on the streets in areas where crime has been more apparent.

Business owners are sharing information with the Angels, that is helping the group form plans and set in place resources to help in the community.

Mayor Keith Hobbs states, “I am proud of the Guardian Angels and what they stand for and how they have conducted themselves. I have spoken to seniors that reside around the downtown and the mere presence of the GA’s has given them a feeling of security and safety. I meet with President Ian Hodgkinson frequently for updates and the program seems to be having a positive effect in the community. I encourage Thunder Bay citizens to join this great organization and volunteer some time and at the same time have a hand in making your community safer.”

Some of the concerns raised today by business owners included the large number of syringes – especially unused syringes that are scattered all over their back lanes and sometimes on their doorsteps. Several women expressed how walking to their cars in the evening is not a pleasant experience.

Open consumption of alcohol, hand sanitizer and hair spray is also a concern for many residents and business owners.

“We are no security guards, we are not police, what we are is residents of our city who care, and instead of complaining or sitting on the couch we are out trying to make a difference”, stated one of the Angels talking to a business owner this morning.

The Guardian Angels have been encouraged by the response they are getting from Thunder Bay. Frequently the street teams are stopped by people who share with them places where they need to go, and more often just to thank them for being here on streets. For many senior citizens, having the Guardian Angels on the streets makes it easier for them to get on with their daily activities.

Additionally, many people are asking how to get involved and help. If you are interested in volunteering, or want more information, visit the Guardian Angels Canada on Facebook.

The downtown Fort William area of Thunder Bay is an area that needs the attention. There were over 300 incidents that Thunder Bay Police responded to in the area in March. 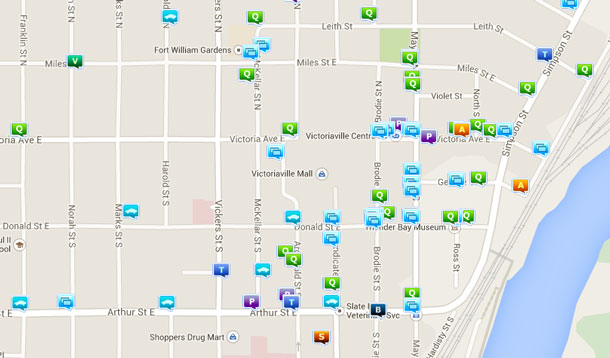 The area has a large number of alcohol and drug related calls, as well as assaults, and disturbances.

Solving the crime issues in the Fort William area is going to take hard work, and it is going to take co-operation from the City of Thunder Bay, local businesses, the Police, and the Guardian Angels.