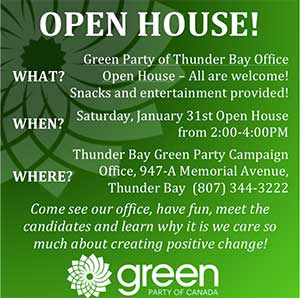 THUNDER BAY – Bruce Hyer is inviting people to the grand opening of the new Green Party federal pre-campaign office which is opening officially on Saturday January 31st at 947 Memorial Ave.

The Green Party says “We have 2 events going on – a party from 2-4 and a nomination meeting for the Thunder Bay-Rainy River riding from 1-2.”

From 1-2 pm, there will be a nomination meeting for Thunder Bay-Rainy River.

Hyer comments, “Then from 2-4 pm, the Green Party of Thunder Bay becomes the… ‘Party Party’!”

“Free food, fiddlers, not too many speeches, and a chance to hang with people who yearn for a different kind of politics, and a Canada that is clean, green, safe, sustainable, prosperous, cooperative, and (just imagine it)… actually democratic”, enthuses the Thunder Bay Superior North MP.