HAWKESBURY – SPORTS – Dan “The Beast” Severn is coming to Great North Wrestling for the company’s first event of 2015 on Saturday February 28th at The Robert Hartley Arena in Hawkesbury ON.
Severn is a former UFC Fighter and WWE wrestler best known for his success in the early years of the Ultimate Fighting Championship when the sport had few rules and only the toughest of the tough survived. Severn was the master of the brutal caged combat in an era where rules were few, hair pulling and groin shots were legal and gloves were not mandatory.

In Severn’s 127 match professional fight career he picked up such accolades as UFC Triple Crown Champion, UFC Superfight Champion and is a member of the Ultimate Fighting Championship Hall of Fame. In professional wrestling he is a 2 time National Wrestling Alliance World Heavyweight Champion but he has never held any Canadian titles to date.

Severn plans to change that when he takes on reigning GNW Canadian Heavyweight Champion HANNIBAL “The Animal” on February 28th in Hawkesbury.

On paper this match would appear to be a potential technical battle as Severn is a former All American at Arizona State and US Olympic Alternated in Amateur Wrestling. HANNIBAL has equal amateur credentials as a former Freestyle National Champion and Olympic Alternate in Greco Roman Wrestling for Canada.

Although both of the combatants are well versed in the technical side of the game they also have reputations as fearsome beasts/animals in the ring as their ring monikers suggest. At any time the bout could have the potential of turning into an all-out brawl with HANNIBAL’s insane hard-core style and Severn’s fists of fury coming into play.

HANNIBAL with have youth on his side, extensive grappling training and always competes in incredible condition but “The Beast” is known for always showing up in top shape and being a legitimate bad ass with a long history of hurting people. Severn says he still has the “fire in his belly to fight” and has his eyes set on the GNW Canadian Championship.

HANNIBAL is already talking Down “The Beast”

In other matches on the card former Canadian Champions Jeremy Prophet will face “Commander” Rick Sniper, Quantum Force will take on “The Afterparty” in a tag team tilt, in woman’s action Silvie Silver will be challenged by the evil Goth Malicia, Martial Arts expert “The Black Dragon” accompanied by Dark Cash will take on Pasquale, “Platinum” Preston Perry and John “The Grape Crusher” Maloney will battle “The Centurions”, The Hart Throbs will face off against local favorite Guy “The Spoiler” Gagne and his protégé Patrick Larocque, International Sensation “The Adventure” Stone Rockwell will make his GNW debut plus much more!

Tickets are on sale now starting at just $10 plus applicable taxes at The Robert Hartley Arena, online at ticketweb.ca or by calling 1-888-222-6608. Prices go up $5 at the door; autographs will be available at the event. Visit WWW.GREATNORTHWRESTLING.CA for more details. 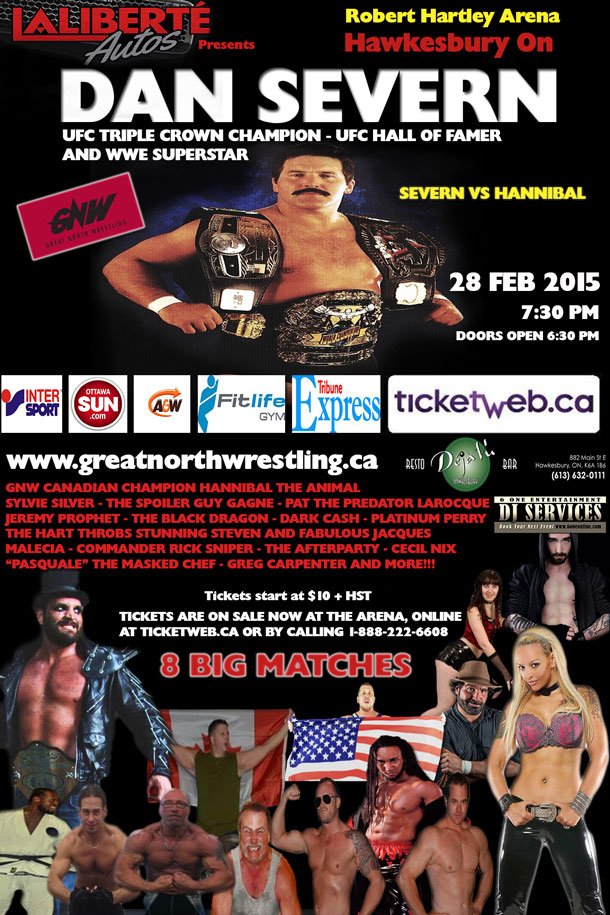