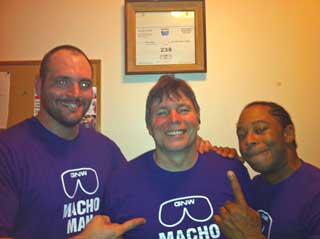 HAWKSBURY – A large crowd of wrestling fans enjoyed a fantastic night of entertainment in Hawksbury last night. The Macho Man Randy Savage was honoured with Great North Wrestling and the brother of the Macho Man, The Genius Lanny Poffo representing the Poffo family.

There was a 25 man Battle Royal for the first-ever Great North Wrestling Championship. Likely pulling out all the energy of The Macho Man plus his own skills, the newly crowned Champion is Lanny “the Genuis” Poffo.

In other exciting action;

Patrick Laroque said, of the event, “Great team work, very good show, fans love it, a show that you can only dream about and on behalf of all the peoples in Hawkesbury, I thank you and we cannot wait to see you guys back again in Hawkesbury”.

If there was one downside to the night, according to promoter Devon Nicholson, it was that Greg “The Hammer” Valentine decided apparently to “no-show” the event. The former star has now, according to a statement from GNW, been dropped from their events. Nicholson stated, “Greg was supposed to do three more events for GNW September 23rd-25 in New Brunswick but will now be replaced with a different wrestler”.