THUNDER BAY – BUSINESS – The Port of Thunder Bay experienced its second consecutive month of very strong grain shipments in June. 965,000 metric tonnes of grain were loaded onto outbound vessels at Thunder Bay’s grain elevators during the month, leading to the port’s strongest June in 17 years.

Compared to the same month last year, the port more than doubled its grain output, with significant increases in vessel calls by both Lakers and Salties. Year-to-date, grain shipments are up 35% over 2013 and 18% over the 5-year average.

Overall monthly tonnage for the port surpassed 1 million tonnes for the second month in a row, with potash and dry bulk commodities also seeing increases over 2013 volumes. The last time both May and June shipments were over 1 million tonnes was 2001. 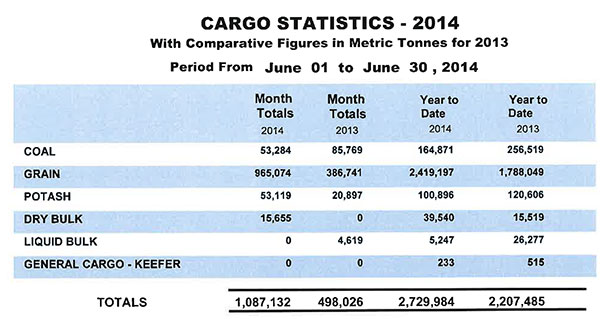