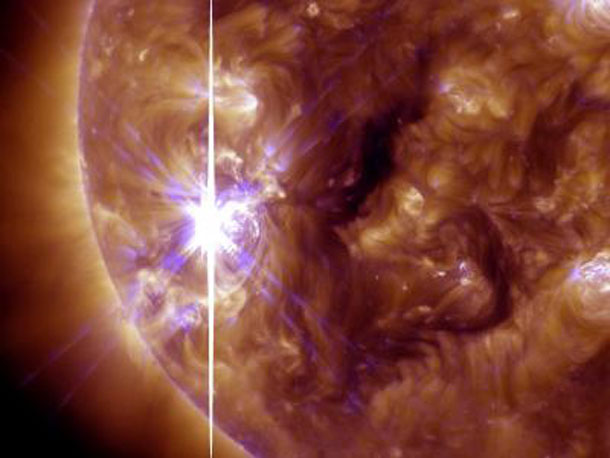 HOUSTON – Solar flares can impact electronics on earth. The sun emitted a significant solar flare, peaking at 5:12 p.m. EST on Nov. 5, 2013. Solar flares are powerful bursts of radiation. Harmful radiation from a flare cannot pass through Earth’s atmosphere to physically affect humans on the ground, however — when intense enough — they can disturb the atmosphere in the layer where GPS and communications signals travel.

This flare is classified as an X3.3 flare. X-class denotes the most intense flares, while the number provides more information about its strength. An X2 is twice as intense as an X1, an X3 is three times as intense, etc.

Increased numbers of flares are quite common at the moment as the sun’s normal 11-year activity cycle is ramping up toward solar maximum conditions.

What is a Solar Flare?

NOAA states, “Solar flares are intense, short-lived releases of energy. They are seen as bright areas on the Sun in optical wavelengths and as bursts of noise in radio wavelengths; they can last from minutes to hours. Flares are our solar system’s largest explosive events. The primary energy source for flares appears to be the tearing and reconnection of strong magnetic fields. They radiate throughout the electromagnetic spectrum, from gamma rays to x-rays, through visible light out to kilometer-long radio waves”.

A Buyers’ Guide for a Car GPS