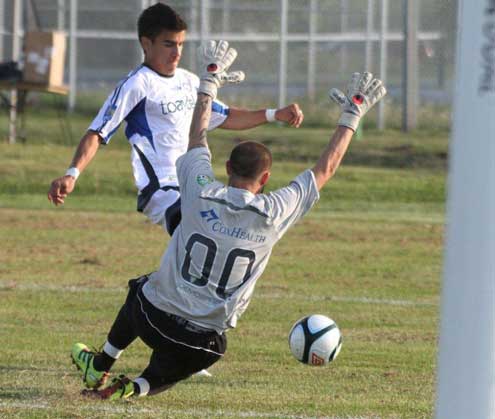 THUNDER BAY – Sports – The Thunder Bay Chill (9-0-0) go on the road today touring the state of Missouri. Having just played the Demize twice last weekend in Thunder Bay, the Chill will drive 1500 km (930 miles) to play the Springfield Demize (3-3-3) for the third time in a row on Saturday night.

The Chill were ungracious hosts on the field and beat them twice to continue their all time undefeated 17-0-0 winning streak against the Springfield team. On a negative note for the Chill, the Demize scored twice on Saturday night after the Chill had rolled off 6 straight clean sheets.

After the game Saturday night, the Chill will travel another 350 km (220 miles) to face the St. Louis Lions (2-6-1). The Chill hosted the Lions for two games earlier this season and outscored them 5-0. St. Louis is coming off a 1-0 victory over the Real Colorado Foxes last Saturday night.

Drive another 400 km (250 miles) and the Chill hit Kansas City to face the Brass (3-3-1) on Tuesday July 2. The Chill has not played Kansas City during this season, however, the Brass come off a 1-0 loss to the Des Moines Menace last Saturday night.

The Chill hit the road right after the game and travel another 1250 km (775 miles) back to Thunder Bay. The Missouri tour will add over 3500 km (approximately 2200 miles) to the Chill bus over 5 days, with the club hoping to come home with 3 more wins and a perfect 12-0-0 record. Thunder Bay can clinch their 4th straight Heartland Division title and 6th in 7 years on this road trip.

Axel Sjoberg was named to the PDL Team of the Week for the second time this season. The 6’7” defender was named to the team for his 2 goals against Springfield that helped the Chill maintain their perfect start to the season.

The next home stance will be on July 19th and 20th when Thunder Bay hosts WSA Winnipeg for the final two regular games of the season.

The Thunder Bay Chill plays in the Premier Development League (PDL) which is comprised of 64 teams throughout North America and is in their 14th season of play.