Shawn grew up in the worst neighborhoods of Edmonton, Alberta. He lost both his parents to drugs at a young age. Early in life, Shawn got into a life of drugs, gangs, crime and frequent incarcerations.

As a youth he would rap at house parties. Later Shawn founded a rap group that evolved into a high profile nationwide gang.

In 2004, while locked up again for again for another stabbing, and facing many years in jail, the drug death of his sister. The apprehension of his kids caused him to reach a breaking point. He vowed to turn his life around.

His message of strength, style, and fun channeled through his music offers a path forward for others to follow.

NNL: Shawn, It has been a while since we last spoke.

What is new in your music? 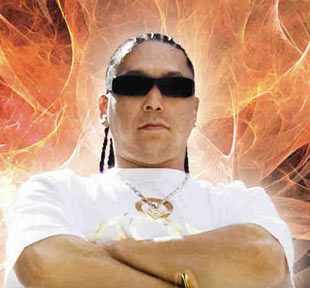 Shawn: I’m experimenting with trying to make mainstream music to see the difference between hits I get on Youtube, as to the positive message ones that I usually do.

NNL: Across Canada Idle No More is continuing to gather strength. In your video Strong, you talk about living in two worlds. Do you think Canada and First Nations can finally figure out how to fully live together?

I don’t want to give answers that may not be fully correct and might offend people. But it would be a beautiful thing if everyone could fully live together……

NNL: Your new video I’mma Git That is edgy.

Tell us a little about it?

Shawn: Yeah I made “I’mma Git That” because I wanted to see what would happen with my music career if I made a song about what alot of people dream of but in the video you notice that it’s starts off with me looking in a magazine dreaming of all that glitz and glamour. But in the end of the video I throw away the magazine and just walk away as still a person without all that stuff……..It wasn’t til later that I realized that I shoulda made it into a comedy spin kind of video instead.

But all in all I’m happy how the vid turned out, an am thankful for all the people that helped out with it

NNL: What is next for Shawn Bernard?

Shawn: I’m putting the finishing touches on what I think will be my final album and a few more videos and then I want to get into production and start helping youth write and record songs and help them start going after their musical dreams and goals by using all the connections and contacts I’ve made in my musical career…..also I think after this album the only time I’ll record a song or shoot a video will be when the song is uplifting and motivational with a strong positive message to people….

Can we expect to see you in Thunder Bay again soon?

I’m hoping to come back to Thunder Bay whenever someone asks me back. Shy-Anne Hovorka and her band, and all the people I met in Thunder Bay were very good hosts and wonderful people so I’d love to come back and visit soon……

Shawn’s music is real and his songs are upbeat, positive and profanity free. He won the audience vote for favorite stage performer at the 2007 Dreamspeakers Festival and was on the cover of the Rez X Comeback issue, Spring, 2008. He also starred on an NFB short documentary on his life called “Walking Alone” which told his story of his recovery, music and family.

Shawn has completed the Aboriginal Family Support Worker program at Norquest College and now works with youth and adults living in high risk lifestyles. When not working or spending time with his family, Shawn promotes independent artists and visits schools and communities sharing his life story and showing that he is living proof that anything is possible.

Meet Darius Bell, aka FlossMobChase, taking over the American hip hop world as a passionate rapper

Miss Money: The journey from raps to riches