THUNDER BAY – Entertainment – Blues Women make history and magic with the first ever international recording.  Blues  artists and an all female back up band joined passionate forces at the end of January. They gathered in Clarksdale, Mississippi near the famed Crossroads to record 17 all original songs.  This all took place at the Hopson Plantation Commissary. Organizers  turned the commissary into a recording studio.

Women blues artists came from all over the globe including Canada, Australia and many states like Texas, Alabama, Maine and more.  Most of the women are recording artists, some are seasoned touring artists, others are award winners. All are blues women songwriters and players, with a female view of the blues.

This was the first project organized and spearheaded by the newly formed group called Blues Women International. Project manager was Lon Mickelson from Minneapolis. Mickelson is a long time blues promoter. Atikokan’s Sunday Wilde assisted with the plannning.

It took months of planning to coordinate the venue. There were many assistants and the female artists involved. It was organized to take place prior to the Memphis IBC so that the women could save on travel costs.

The Hopson Plantation Commissary stands today in much the same condition as in its glory days over fifty years ago. The building is full of antique and historical items which create a nostalgic atmosphere reminiscent of the deep south Delta 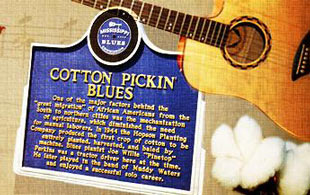 Cotton had always required a large amount of hand labor, at one time over a million families to raise 22 million acres of cotton.

Today the Hopson Plantation is a place for music, arts and antiques and history.

The recording took place on Monday and Tuesday January 28-29 and is now in the second stage of the mixing and editing. The new release is expected to be launched in March of 2013. Many of the artists stayed on site at the Shack Up Inn and the Hopson Commissary so they could network, and work on the creative process. It was magic and history in the making with so many female artists in the blues together to meld and record.

A variety of original music was recorded in this inaugural project, and it is hoped that this project will be one of many organized by the Blues Women International.

Stay tuned for the upcoming release – out in May of 2013, and please check out all the women artists listed above for further information on their musical journey’s.

Sunday wilde in the Running for Independence