THUNDER BAY – Crimebeat – Over the past year, reporting on Crimebeat, NetNewsledger has featured reports from various communities across Canada, and North America where police are using social media including Facebook, Twitter, and Youtube, as well as innovative policies to connect with their community’s residents. The overall goal is to make their communities safer.

Those communities range from the very large cities to far smaller cities. Crime rates are, according to Statistics Canada slowly dropping across Canada. The types of crimes are changing too, just as means of communication are changing too. However the means of policing and the tactics used by progressive and
innovative police services are changing to adapt to new realities.

Interestingly, there also appears to be a relationship between police services which have embraced the new technology and social media, and dropping crime rates.

In the past twenty years, the basic duties and responsibilities of police services across Canada have not really changed, citizens want to live in safe communities. Police officers and police executives want to make their communities safer too. It is a partnership with enormous potential.

What has changed however are the methods that progressive police services can reach out to the people whom they serve. Likely if one were to choose a leader in Canadian police services in engaging new technology, it would be the Toronto Police Service, but that lead isn’t all that wide. 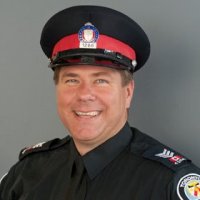 Toronto Police Service have kicked it up more than one notch in 2011 online. Sgt. Tim Burrows has been recognized for his work positioning the Service as a global law enforcement leader in social media. The Ontario Association of Chiefs of Police (OACP) and the Ontario Media Relations Officers Network (OMRON)
presented the Corporate Communications sergeant with the Crime Prevention Media Award. The presentation took place on Dec. 19 at police headquarters in Toronto. The award honors law enforcement officers who have demonstrated a high level of commitment to crime prevention through the filter of the media and, who have assisted their community and police service, by creating messaging that has assisted in crime prevention.

“Tim is specifically being honored for his work in social media, in which he’s the undisputed guru in the province, and also for his work in traffic which is a real passion for him,” said OACP Director of Government Relations and Communications Joe Couto. “His colleagues around the province recognize him as a
leader and felt he was deserving of this award. It’s really a lifetime achievement award, but he’s in no way finished in his career. He’s got a lot to do yet. He’s an exceptional communicator and somebody that we put out there and say ‘this is what we want everybody who is communicating in policing to aspire to be.’”

One of the positives for the Vancouver Police are their innovative use of social media as a tool to reach out to their citizens. They also encourage the public to engage with police. Vancouver has, over the past decade seen their crime rate drop by forty-eight percent.

It is actually a fundamental process that stems from the roots of modern policing, Sir Robert Peel, recognized as the father of modern policing created a set of principles for police services. Those rules are as valid today as the day they were written. One of the principles states, “Police, at all times, should maintain a relationship with the public that gives reality to the historic tradition that the police are the public and the public are the police; the police being only members of the public who are paid to give full-time attention to duties which are incumbent on every citizen in the interests of community welfare and existence”.

In today’s world, where more and more people are online, it is natural that progressive and modern police services also boost their online communications efforts. That is a theme that police services across Canada where innovative solutions to make the communities they serve safer continues to repeat.

For smaller cities, it might be viewed as an extra expense, or an unneeded effort. Increasingly that is not the case. Take, for example, Chatham-Kent Ontario. The police service in this community has embraced social media. Perhaps that is one of the factors contributing to the twenty per cent decrease in crime in the community over the past decade.

The Chatham-Kent Police Service has a great approach to innovating social media into their efforts. Their 2011 “Top Ten Silliest 911 Calls” video posted on Youtube, as well as their engagement of social media are likely the best use of the Internet by police in a smaller city. Chatham-Kent serves a population of
about 109,000.

The Facebook page for the Chatham-Kent Police Service has almost 1500 people on it. That represents a fifty percent increase over the course of 2011. The service uses that page to reach out to the community. It is innovative and positive. The service’s Twitter feed allows a quick means of the police reaching the residents that they serve. Even on holidays, including New Year’s Day this positive and innovative police service is sharing information. “CKPS checked 1400 drivers overnight in RIDE. No violations!” was the tweet issued on New Year’s morning.

In Edmonton Alberta, the Edmonton Police Service are another of the services which is using innovation and the Internet to better reach residents of their community. Through Youtube, the EPS is offering crime prevention updates, and tips to residents. Those timely tips can help people keep their families safer, by sharing common sense practices in crime prevention.

It is likely in 2012 that many more police services will step up their online engagement with the citizens who they serve. Those communities where the police services are blazing a trail forward likely have police executives, chiefs and police services boards with a view to the future.