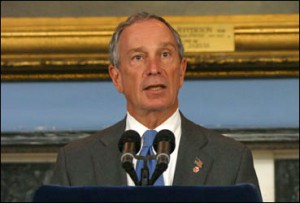 NEW YORK – Mayor Bloomberg, on the eve of the 10th Anniversary of the September 11, 2001 attacks on the World Trade Centre states that there is a new threat. “Federal authorities, as you know, have announced that they’ve received credible information that terrorists may be plotting an attack in the coming days. Now as we approach the 10th anniversary of the 9/11 attacks, the NYPD, FBI, and the entire intelligence community have been on heightened alert – because we know that terrorists view the anniversary as an opportunity to strike again,” stated the Mayor in a Thursday evening press conference.

“The NYPD is deploying additional resources around the City and taking other steps to keep our city safe – some of which you may notice, and some of which you will not notice. But there is no reason for any of the rest of us to change anything in our daily routines. We have the best police department in the world. Over the past decade, they have helped thwart more than a dozen potential attacks. Here’s what you’ve got to do: If you see something, say something and that has always been true, and over the next few days, we should all keep our eyes wide open”.

“But the best thing that we can do to fight terror is to refuse to be intimidated by it. For ten years, we have not allowed terrorists to intimidate us. We have lived our lives without fear – and we will continue to do so. So go about your business as you normally would – but just be vigilant. If you see something potentially suspicious, call 311. And if you see something that you think is potentially dangerous, call 911,” continued Bloomberg. “We have lived for ten years with the potential for other terrorist attacks. The NYPD has stopped, we think, 13 of them at least and for all we know there were many others that, when terrorists want to attack us, took a look at what kind of precautions the NYPD and other agencies take here and said, ‘We’re not going to get away with it, so we’re not going to do it. Too hot and just not do that.’ You’ll never know any of those things”.

“Every year there is an anniversary, that’s the time when you would think that we should heighten our security and we do. The risks are greater then, we imagine, but nobody is really sure. Every time there are events where large numbers of people gather you see the NYPD implementing strategies of crowd control and observations much more stringent than they would do on a normal day”.