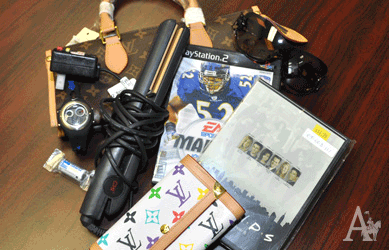 THUNDER BAY – Crimebeat – On August 26th, 2011 the London Detachment of the Royal Canadian Mounted Police, Rural Unit discovered a vendor in possession of approximately 400 counterfeit items at the Woodstock Fairgrounds. The counterfeit items were seized and the vendor was served with a Counterfeit Product Notice.

A Counterfeit Product Notice is a written warning, in lieu of criminal charges, which serves to educate merchants in regards to offences associated to selling counterfeit products. In the future, if the vendor is found in possession of counterfeit items, he could face charges under the Trade-marks Act and the Criminal Code.

“Counterfeiting of consumer items and their sales is not only hurting the economy through loss of jobs and tax revenue but there is information linking such items to more serious issues such as child labor, drug trafficking, organized crime and terrorism,” stated Sgt. Mark Groulx, NCO i/c of London RCMP’s Rural Unit. “The RCMP is committed to combating this type of criminal activity through education and enforcement.”

Counterfeit goods – whether smuggled into the country or produced in Canada – represent a financial loss to legitimate businesses, governments and taxpayers. As these goods are often cheaply made and do not meet Canadian standards, they not only defraud consumers, but may also represent risks to consumer/user safety.