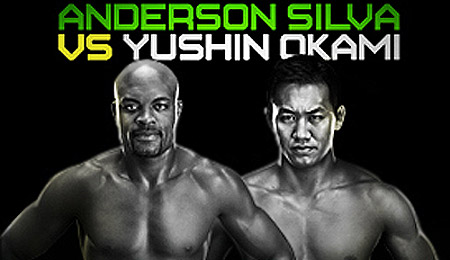 Round 1: Lots of movement from Anderson Silva early, circling Okami, shifting stances, pawing his hand out for distance, looking for a reaction out of Okami. Oakmi moves in punching, but Silva pushes him away. Okami sneaks n a jab, but Silva reciprocates. Okami is holding the center of the Octagon, but moves in again with punches, pressing Silva to the fence. Silva clinches, but seems very relaxed. Okami throwing some short uppercuts. Silva fires back with knees to the body. They continue to trade knees and uppercuts, but Silva still looking very relaxed. Okami backs away and they move to the center of the Octagon, trading strikes. Silva starts landing a stiff jab, using some smooth, elusive movement to avoid most of Okami’s strikes. Silva Lands a kick to the body and follows with a knee to the midsection just as the bell sounds.

Round 2: Silva opens much more aggressively this round, lots of hand movement, and rocks Okami with a right hook. Okami firing his jab, Silva making him miss solely with head movement, then drops Okami with a single jab. He doesn’t follow up, however, allowing Okami back to his feet. Okami, swings and a miss. Silva drops Okami again with right hand, this time he follows up, standing, dropping bombs down on Okami who is covered up on the mat. Silva drops to his knees and continues dropping down punches until referee Herb Dean stops the fight.

Round 1: Both fighters come out looking to fire, Shogun punching more, Griffin kicking. Shogun starts to assert himself, landing more frequently in the early going. Griffin looks a little sluggish and Shogun drops him with punches to the head and forces him to the mat when Griffin tries to reach for his legs. Shogun immediately follows Griffin to the mat and pounds him down with hammerfists until referee Marc Goddard stops the fight.

Round 1: They start trading punches from the bell, both guys landing, but Pearson scoring the first staggering blow. Pearson is doing a good job pressing the pace, keeping Barboza moving backwards, not letting him get off many good combinations, while Pearson does. Pearson lands the superman punch and then follows with a stinging jab. Pearson misses with the jumping knee, but lands a left-right combination. He eats a Barboza spinning back kick, however. Pearson rocks Barboza’s chin, with a stiff left hand; follows shortly thereafter with a right superman punch.  Pearson doing a good job mixing up looks and attacks to keep Barboza out of his game. Pearson lands a punch followed by a high left kick, but can’t score the takedown when he follows with a shot just before the bell

Round 2: Pearson kicks to the midsection, but Barboza catches it and fires back with his own kick to the midsection in combination with a punch that puts Pearson on the mat. The Brit is back to his feet quickly. Barboza kicks high, but Pearson comes back with a chopping low kick and follows with a couple punches that snap Barboza’s head back. Pearson getting back in a rhythm, again landing leg kicks followed by a combination of punches. He telegraphs a takedown, however, and Barboza easily sprawls out. Barboza is landing more strikes this round, but Pearson is still outnumbering him about three to one, staying much busier. Another spinning back kick from Barboza and he follows with a switch kick to the midsection. Pearson fires back with the superman punch. Barboza fires off several kicks that are blocked, but still have some sting in them

Round 3: Pearson opens with two lead left hooks that find their mark. Barboza goes to the spinning back kick again, but it doesn’t land cleanly. Barboza goes for a flying knee, but Pearson catches it, avoiding any damage. Barboza lands a kick to the left side, but Pearson drives him to the cage with punches. He drops for the takedown, but Barboza again defends. Barboza has his jab going a little more now. Pearson is still pressing, but not landing as cleanly now. Barboza sprawls out another Pearson takedown attempt then fires off another back kick that grazes Pearson’s shoulder. Pearson starting to land more of his punch combinations, Barboza missing with his kicks starts amping up his punch combinations as well. Pearson steps up the pace again, flying in with the superman punch, but then eating a spinning back kick. He fires back with a flying knee to the chest just before the bell

Round 1: Both come out firing, but they end up clinched on the fence briefly. They separate and trade a couple blows before Nogueira shoots, but Schaub defends. Schaub looks relaxed, moving well. Nogueira moves in to punch, but gets rocked by an uppercut. Schuab is getting his jab going early, but Nogueira steps in for a solid 1-2 combination. Schaub stings Nog with the jab and lands the uppercut again. Nogueira recovers and starts stalking again, but Schaub goes right back to the jab. Nogueira rocks Schaub with a huge right hand, sending him staggering back to the cage. Nogueira follows him in and unleashes a couple more punches and sends Schaub face down to the canvas.

Round 1: Cane using his six-inch reach advantage early, utilizing low kicks and firing off punches from a distance. Nedkov is trying to find an opening to get inside of Cane’s reach. But Cane is doing a good job staying out of Nedkov’s range. Cane lands a solid combination of punches about three minutes into the round that rocks Nedkov. He follows shortly thereafter with a straight left to the nose and then kicks his legs out from under him. Nedkov is immediately back to his feet, but looks a little wobbly. Nedkov clips Cane with a punch that staggers him back. The Bulgarian keeps the pressure on, dropping Cane to the mat with several more punches, he keeps firing away as referee Mario Yamasaki stands and watches a defenseless Cane take punch after punch to the face before finally stepping in to stop it.

Round 1: They trade a few strikes before Tavares drives and takes Fisher to the mat, pinning him to the fence. Tavares begins grounding and pounding from half guard. Tavares is doing a great job controlling position, not allowing Fisher to stand, and then keeps peppering him with punches. In a night of quick stand-ups, the referee moves in and restarts the fight on the fight. Tavares quickly presses Fisher to the cage, again looking for the takedown, and he eventually gets it. Again Tavares starts peppering Fisher with punches, landing some heavier blows this time around, mixing in some elbows as well. Tavares transitions to mount and then briefly to Fisher’s back, but this time Fisher gets back to his feet as the round closes

Round 2: Tavares immediately fires off two kicks up high; they’re hard, but blocked. He then shoots in and takes Fisher to the mat once again, starting up ground and pound from inside Fisher’s full guard. Tavares moves to a half mount and continues pummeling Fisher, not landing really heavy blows, but continuing to pound away at him. Tavares transitions to Fisher’s back and opens up with some heavy blows. Fisher can find no way to slow the onslaught and the referee steps in to call the fight.

Round 1: Miller starts out firing punches for the head, while Palhares lands a couple solid leg kicks. Miller, however, scores the takedown, but nearly gets his arm caught in a submission. He defends and they return to their feet, Palhares attacking Miller’s lead leg with kicks. Solid jab from Miller snaps Palhares’ head back. Palhares lands a front kick that drops Miller, who tries to get up, but Palhares scoops and slams him. Miller reverses and double-legs Palhares, landing in the Brazilian’s full guard. He backs out and they return to their feet. Palhares still kicking, lands a hard blow to Miller’s left side. Miller goes for a leg kick, Palhares counters dropping Miller with a kick to the head. Palhares follows with punches and in confusion, thinks the referee stops the fight and jumps up on the cage, but is brought back down and the fight restarted. Miller connects with a punch that seems to put Palhares out, but he recovers as he hits the mat. They get back to their feet and he storms Miller just before the bell

Round 2: Palhares moves in swinging, Miler fires back, but it is Palhares that scores with several knees and some more punches. He puts Miller on his back, but nearly gets locked up in a triangle. He slams his way out, stands up, and starts pummeling a downed Miller. He keeps pounding away with punches, but Miller somehow keeps defending, surviving. Palhares starts to slow his pace about midway through the round, Miller working hard trying to tie Palhares’ arms up. Palhares stands again, driving hard punches to Miller’s head. Miller pushes him away briefly with his feet, but Palhares jumps right back into Miller’s guard and starts pummeling him again. Miller is bleeding badly around the eyes, a huge cut and swelling around his left eye, but somehow digs deep and lasts to the bell

Round 3: The final stanza starts at a much slower pace. Palhares has lost a lot of the speed in his punches. Miller is trying to get some combinations going, but still can’t seem to find an opening. Miller is starting to land his jab a little bit, but he’s got to get more than that going if he is to win this fight. He needs a finish. Palhares lands a couple solid leg kicks, but his punches are almost non-existent midway through the round. But again, Miller is getting little more than his jab going. Both fighters are running on empty, neither able to mount any damage even when they do land.

Fight night bonus awards in the amount of $100,000 each were given to Antonio Rodrigo Nogueira, Edson Barboza and Ross Pearson after the historic UFC 134 card in Rio de Janeiro. It was the UFC’s first trip to Brazil since 1998.

Dana White UFC 134 Post-Fight Interview Dana White has some ideas about who should appear on the UFC’s first Fox event.